Girl tipped for stardom after appearing in zombie film 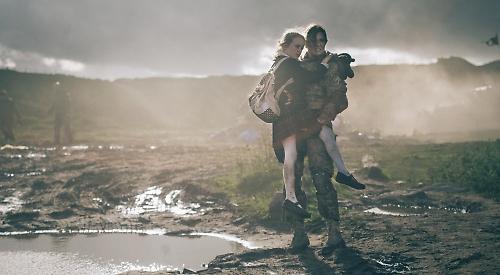 A STUDENT at the Piggott School in Wargrave wants to pursue a career in Hollywood after starring in a zombie horror film.

Jasmine Mitchell, 12, appears in Redcon-1 as Alicia, a young girl who is left to fight for her survival after a viral outbreak renders the UK quarantined.

The British film, which was released on DVD last week, shows the South-East of England cut off from the rest of the world following the zombie outbreak before intelligence finds that the scientist responsible is alive and well in London.

With his recovery being the only hope of a cure, a squad of eight special forces soldiers is sent to rescue him from the city, now ruled by the undead, within 72 hours.

Jasmine, who lives in Twyford with her parents Kevin and Lainey and brother George, 10, made her film debut in the movie alongside Carlos Gallardo, of Once Upon A Time In Mexico, Mark Strange, of Batman Begins, and bodybuilder turned actor Martyn Ford.

She started acting in local theatre groups when she was five before joining Redroofs Theatre School in Maidenhead.

She continued her training before being cast in Redcon-1, which involved travelling to cities across Britain during a hectic filming schedule.

Jasmine said: “This was my first film and when I got the part I was just so excited.

“The cast and crew were so friendly — we all had to work really hard every day but we had lots of fun too. It was all filmed on location, so we went to Glasgow, Edinburgh, Aberdeen and Manchester with a few scenes in London. It was amazing.”

“I believe she has a real bright future ahead of her.”

Actor and producer Carlos Gallardo added: “I’ve had the opportunity to work with many film stars in my career, from Salma Hayek to Eva Mendez, and also discover some stars. In Jasmine I see a star in the making.”

Jasmine also appears on the special features section of the DVD, where she speaks about her time on set, experiences working with the director and other actors and the character she plays in the film.

She attended screenings of the film at Vue cinema in Reading in September with her parents.

Mrs Mitchell said: “It was amazing seeing so much hard work, dedication and creativity from everyone involved. It was a real eye-opener into how much goes into making a film. We were really proud of how hard Jasmine worked and how she fitted in so well with all of the cast and crew — she clearly loved every minute!”

Part of the ticket revenue from the screenings was donated to Against Breast Cancer for which Mrs Mitchell will be running in the London Marathon next month.

Jasmine was also cast as an acting double in the Disney film Mary Poppins Returns, which starred Emily Blunt, and was more recently cast in the role of Alice in a short film called Spiral, directed by Joshua Dickinson.

As well as attending the Piggott School, she is also a part-time student at JG Dance Academies & Theatre College in Reading.

Jasmine said: “I really enjoy drama and it’s one of my favourite subjects at school. I’d love to do more acting.”