Affair led to a love letter for the ages 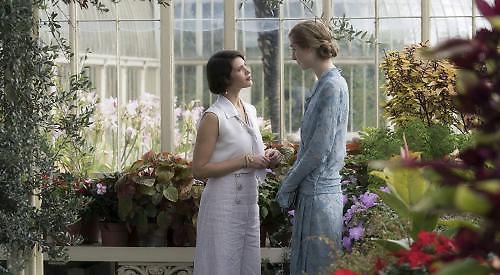 THIS time at least there will be no fake nose.

Nicole Kidman won best actress for her portrayal of Virginia Woolf, but not everyone was convinced by her performance.

Time magazine’s film critic Richard Schickel wrote: “Watching The Hours, one finds oneself focusing excessively on the unfortunate prosthetic nose Kidman affects in order to look more like the novelist.”

He also wondered why the film-makers had turned Woolf — “a woman of incisive mind” — into a “hapless ditherer”.

Fans of the author who agree with Schickel are therefore likely to welcome the release of Vita and Virginia, based on the 1992 stage play of the same name by Upstairs, Downstairs
co-creator Eileen Atkins.

Set amidst the bohemian high society of the Twenties, Vita and Virginia tells the scintillating true story of a literary love affair that fuelled the imagination of one of the 20th century’s most celebrated writers.

Gemma Arterton stars as Vita Sackville-West, the brash aristocratic wife of a diplomat who refuses to be constrained by her marriage, defiantly courting scandal through her affairs with women.

When she meets the brilliant but troubled Virginia Woolf (Elizabeth Debicki), she is immediately attracted to the famed novelist’s eccentric genius and enigmatic allure.

So begins an intense, passionate relationship marked by all-consuming desire, intellectual gamesmanship, and destructive jealousy that will leave both women profoundly transformed and inspire the writing of one of Woolf’s greatest works, Orlando, a satirical novel about an immortal gender-fluid aristocrat — of which Vita’s son Nigel Nicolson later wrote: “The effect of Vita on Virginia is all contained in Orlando, the longest and most charming love letter in literature, in which she explores Vita, weaves her in and out of the centuries, tosses her from one sex to the other, plays with her, dresses her in furs, lace and emeralds, teases her, flirts with her, drops a veil of mist around her.”

A daring celebration of an unconventional bond, and a vivid exploration of gender, sexuality, creativity and passion, Vita and Virginia charts the love story of two women — two writers — who smashed through social barriers to be together.

The film is showing at Henley’s Regal Picturehouse cinema from today (Friday).