Dancing in the dark showed us the light 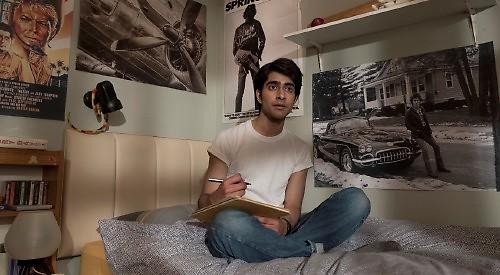 YOU don’t have to be born in the USA for the music of Bruce Springsteen to change your life.

That’s the message of Blinded by the Light, a British comedy-drama inspired by the life story of journalist and broadcaster Sarfraz Manzoor — a huge fan of “The Boss” and all his works.

The film revolves around Javed, a British teen of Pakistani descent growing up amidst the racial and economic unrest of 1987 Thatcherite Britain.

Javed writes poetry to escape the intolerance of his town and the inflexibility of his traditional father. Upon hearing the music of Springsteen, he finds parallels with his
working-class life in the compelling lyrics.

As he uncovers an outlet for his own repressed ambitions, Javed gradually becomes brave enough to express himself in his own unique voice.

Blinded by the Light is based on Manzoor’s 2007 memoir Greetings from Bury Park: Race, Religion and Rock ’n’ Roll.

Born in Pakistan, his family emigrated to Britain in 1974, settling in Luton, and he went on to work as a producer and reporter on Channel 4 News. He is now an established journalist who regularly contributes to the Guardian and presents documentaries on BBC Radio 4.

Manzoor co-wrote the script for Blinded by the Light with screenwriter Paul Mayeda Berges and director Gurinder Chadha, who previously directed 2002’s Bend It Like Beckham.

Chadha and Manzoor developed the film out of their mutual passion for Springsteen, whom they both met at the London premiere of the Springsteen documentary The Promise in 2010, where they learned that he had read and greatly admired Manzoor’s book.

The film is a reminder of the transformative power of music on a personal and global scale, and how it transcends race, religion and class. It manages to stay rooted in the British tradition of quirky comedies while addressing the weighty social and emotional issues of racism and identity.

It’s also a must-see for Springsteen fans as the film features several of his songs — and unlike other musically-centred films there are no covers or alternative versions of the music.

Blinded by the Light is showing at Henley’s Regal Picturehouse cinema from today (Friday).