Reggae masters are telling their stories 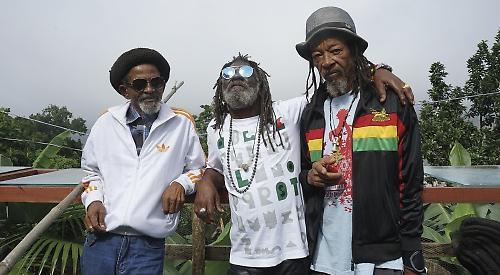 HE made his name with 2003’s Girl With a Pearl Earring, the success of which saw him recruited to direct Hannibal Lecter preview Hannibal Rising.

Now in a position to follow his personal passions, the British director Peter Webber is returning to cinemas with a 99-minute film documenting the roots of Jamaican reggae and the efforts to revitalise the genre for a new generation.

Starring a number of pioneering musicians including Ken Boothe, Kiddus I, Winston McAnuff, Cedric Myton and Judy Mowatt — the feature-length documentary charts the group’s collaborative efforts to produce an intimate and sincere album which draws together some of their favourite tracks from throughout their musical careers. At the heart of this documentary is the shared love for Jamaica and its musical heritage.

Spurred by his lifelong adoration of reggae, Webber — who has made documentaries on music in the past — follows the musicians throughout the recording process, offering a unique insight into the domestic lives of the musicians as they produce the album in their Kingston homes.

Set against the backdrop of a series of stunning Jamaican landscapes, Webber captures the importance of reggae as both a wider cultural phenomenon as well as a personal love, as each star shares their relationship with the genre.

Switching between rousing concert footage and informal anecdotes and memories, Inna De Yard is not only a memoir of reggae’s peak popularity, but relates the music to the modern age and focuses on the desire to renew the music for a new generation of fans.

Given that Webber’s feature debut was nominated for three Oscars, two Golden Globes and 10 BAFTA Awards, there can be no doubting his cinematic abilities.

A collaboration between a number of great artistic talents, Inna De Yard is a vibrant and well-conceived portrait of Jamaican culture, as told by the music and the musicians themselves.

Charting the history of reggae’s rise and fall, including its importance during periods of political tension, Webber’s film is an uplifting account of the musical genre as a lifelong obsession and something which has been loved for generations — and many more to come.