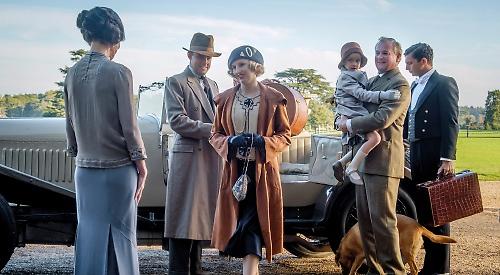 WHEN it first launched on ITV in 2010, Downton Abbey looked like just another costume drama — a pleasant Sunday evening diversion but hardly summer blockbuster material.

Yet nine years and six award-winning seasons later, that is where we are.

Something about this particular upstairs-downstairs story caught people’s imaginations in a way that no other period drama had done since, well, the original Upstairs, Downstairs in the Seventies.

The high society of the aristocratic Crawley family was intercut with the more everyday, relatable concerns of their staff, with the romantic and financial trials of both groups weaving together in unexpected and often moving ways.

The show swiftly garnered international acclaim — particularly with American audiences — so much so that after the final episode was broadcast in 2015, Downton fans were quick to lobby for more.

The show’s creator Julian Fellowes, who enjoyed big screen success as the writer of 2001’s Gosford Park, gradually began to formulate ideas for a film.

He had at first declared himself “daunted” by the prospect, saying that he wanted to be certain that whatever he did would have a cinematic structure and a story paced for a single instalment rather than a full season’s worth of episodes.

“When we finished the show the idea of a film started to form,” he said recently. “I was keen to bring the theme of a royal visit where everyone upstairs and downstairs would be on their best behaviour. This became the centre of the film.”

So it is that our cast get the news that King George V (Simon Jones) and Queen Mary (Geraldine James) are inviting themselves to Downton for the day.

Understandably, this sends the household into a flurry of silver-polishing, meal-planning and spring-cleaning to ensure that everything is shipshape for the monarch. The tension in the servants’ quarters is then magnified by the arrival of the exacting royal butler (David Haig), who casts a gimlet eye over the arrangements and exposes everyone’s shortcomings.

Things are no less frantic above stairs, where Hugh Bonneville’s Lord Grantham has stepped back from the day to day management of the estate and put his daughter Lady Mary in charge of arrangements for the visit.

A flash of inspiration sees her recruit the now-retired butler Carson (Jim Carter) to oversee the staff.

Happily, another veteran — Maggie Smith’s Dowager Countess — is still on hand to dole out the one-liners.