Brad’s reaching for the stars with sci-fi 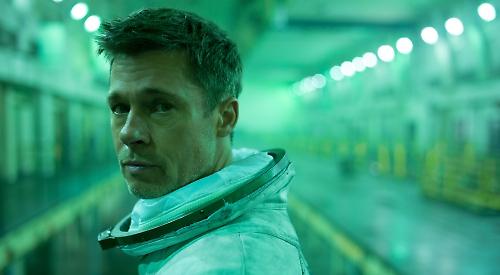 BRAD Pitt is hurtling into space on an unforgettable journey across the solar system in the hope of reuniting with his missing father.

This will be his first plunge into the science fiction genre since his role in the 1995 film 12 Monkeys, which earned him a Golden Globe Award for Best Supporting Actor.

He lives in a sardonic take on a dystopian future 100 years from now, where people take selfies on the moon and buy cheap lunar souvenirs. There’s even an established transport system between different planets.

If you don’t like heights, this film may cause queasiness. While putting the finishing touches to a giant telescope, Roy loses his footing and falls thousands of feet.

It is believed the telescope was rocked by an “energy burst” from Neptune — a signal that Roy’s father who embarked on a mission there, could still be alive.

This jumpstarts Roy’s journey to find his father, reaching lonelier and scarier outposts on the moon, Mars and Neptune along the way.

It is also a journey into Roy’s own heart of darkness as he battles to overcome his inability to express himself and reconcile with his father.

The pace is slow at first, but once in tune with its rhythm, the viewer is hypnotised by its spectacular special effects and minimalist score.

The cinematographer, Hoyte van Hoytema, is also behind the breathtaking visuals of Interstellar and Dunkirk — though this film is directed by James Gray rather than Christopher Nolan.

The film had been a top secret project born a few years ago by Gray and his co-writer, Ethan Gross. Prior to this venture, the pair had only written four episodes of the TV show Fringe.

The film certainly overlaps with the director’s previous feature, 2016’s The Lost City of Z, in which a British explorer is looking for a lost civilisation in the Amazon jungle but really trying to exorcise his demons in doing so.

This is not another jargon-filled action film you need a science degree to understand. Beneath the apocalyptic drama is an intimate exploration of the unbreakable bond between parent and child.

Having premiered at the Venice Film Festival, Ad Astra was released in UK cinemas on Wednesday (September 18) and is now showing at Henley’s Regal Picturehouse.