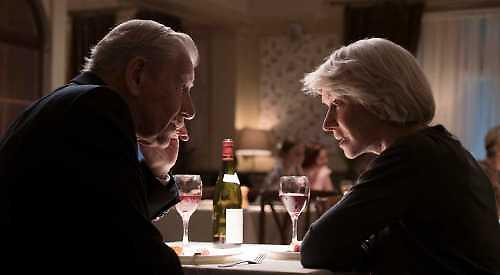 WHILE Gandalf in The Lord of the Rings may always be the role with which he is most closely identified, some of Ian McKellen’s best work away from Middle Earth has come in collaboration with director Bill Condon.

The pair first worked together on 1998’s Gods and Monsters, the story of Frankenstein director James Whale, which saw Condon win the Oscar for best adapted screenplay and McKellen nominated for best actor.

Based on the bestselling novel by Nicholas Searle, McKellen plays Roy Courtney, a career conman with a ruthless streak.

When we first meet him, he’s found a new mark in the shape of Helen Mirren’s Betty McLeish, a well-to-do widow who he meets via an online dating site.

Roy is polite, charming and a little physically fragile — just the sensitive sort that Betty might consider letting into her life.

Of course, it soon becomes clear to the audience — if not Betty — that Roy is anything but a genial old gent. A gruesome scene early on shows just how far he is prepared to go when things don’t go his way.

Nor does he work alone. Jim Carter, playing a very different type to his usual Carson the butler in Downton Abbey, is Roy’s partner in a scam that will have deadly consequences.

Although Betty is the naive innocent who only has her live-in grandson Steven (Russell Tovey) to look out for her, this set-up only scratches the surface of The Good Liar, which boasts an onion-like plot layered with surprise turns.

Condon is a director more than used to working on big movies, be it musicals (Dreamgirls), Disney remakes (Beauty and the Beast) or fantasy-horror (The Twilight Saga: Breaking Dawn). But here it’s clear just how much he relishes working on a smaller-scale, character-driven tale, albeit one punctuated with flashes of unexpected violence.

One of the other joys of this film is seeing McKellen and Mirren on screen together for the first time, with BBC favourite Tovey a pleasing addition to the mix.

With a story that divides between London and later Berlin, as plot twists unfold, Condon and screenwriter Jeffrey Hatcher explore what it means to live a lie and just how it can soak through the fabric of an entire life.

With McKellen relishing the chance to play the sort of seedy character he is rarely cast as, what results is a consistently surprising and always engaging drama.

The Good Liar is showing at the Regal Picturehouse from today (Friday).