Motorsport duo had the need for speed 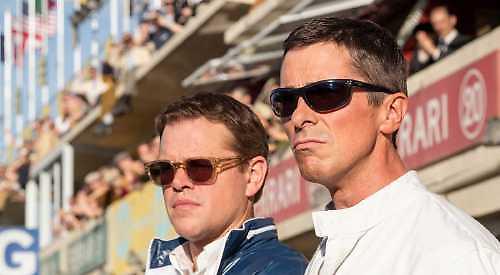 THE summer of 1966 will always be synonymous with the England football team winning the World Cup.

But just over a month earlier, Le Mans in north-western France, had been the scene of a landmark sporting triumph that is the subject of a new film by director James Mangold, who made his name in the late Nineties with Cop Land and Girl, Interrupted.

This saw a team of determined automotive pioneers pull off one of the biggest upsets in the history of sports car racing when Henry Ford’s team beat Enzo Ferrari’s at the 34th Grand Prix of Endurance, also known as the 24 Hours of Le Mans race.

Although a giant of American industry, Ford were very much the underdogs compared to sleek, racing-red Ferrari.

Now, more than half a century on, the remarkable true story of what they did and how they did it is coming to the big screen.

Matt Damon plays Carroll Shelby, the automotive designer and engineer hired by Ford to take them to Le Mans.

Christian Bale is Ken Miles, a Second World War veteran and professional racing car driver who Shelby enlisted to drive the new Ford GT40. By focusing on the relationship between Shelby and Miles, Mangold makes a film that never fails to entertain — even if you know absolutely nothing about cars or motorsport.

Best known for her starring role in the TV series Outlander, Catriona Balfe is exceptional as Ken Miles’s supportive wife Mollie, while young actor Noah Jupe continues to impress as his son Peter.

The ensemble is completed by Jon Bernthal (Baby Driver) as Ford’s vice-president, Lee Iacocca, and Tracy Letts (The Post) as Henry Ford II, the CEO who greenlights the mission to Le Mans.

It’s a strong showing from a cast of talented actors, all of whom get their moment to shine. With Damon and Bale delighting in their roles as the Butch and Sundance of the motor racing world, Le Mans ’66 is an energetic, often very funny film, which is wildly different from Mangold’s past work on 2017’s Logan and his 2007 Western 3:10 to Yuma.

Car enthusiasts will be satisfied by the heart-stopping adrenaline of the race sequences, and the film — whose original title was Ford v Ferrari — gives the audience an appreciation of just how much work goes into a mode of transport that most of us take for granted every day.

When the dust settles, Le Mans ’66 emerges as a moving testament to hard work, perseverance, and the fearlessness of Carroll Shelby and Ken Miles.

The film is showing at the Regal Picturehouse cinema from today (Friday).