Animated sequel is a thaw-fire hit 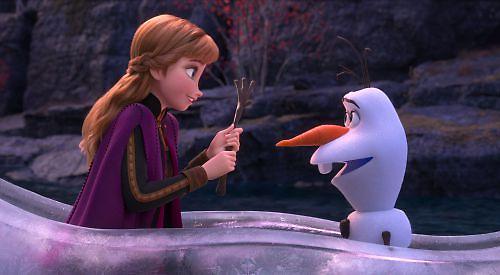 WHEN the first Frozen blasted into cinemas in 2013, it swiftly became the highest-grossing animated film of all time.

It won Disney the Oscar for best animated feature, broke merchandising records and became a singalong smash, with Let It Go now a worldwide karaoke fixture.

Making Frozen 2 was always going to happen. But the creatives at Disney were so determined that it should be artistically justified that they’ve taken six years to perfect what, amazingly, is their first ever animated musical sequel.

To recap: loosely inspired by the Hans Christian Andersen fairytale “The Snow Queen”, Frozen is the stirring story of two estranged princesses called Elsa and Anna, and the alarmingly frosty spell Elsa casts over their kingdom, Arendelle.

Frozen 2’s story starts three years later. Elsa (Idina Menzel) is still queen of Arendelle and has, we are relieved to learn, used her frozen fractals to create a magical permafrost all around their adorable little pal Olaf the snowman (Josh Gad), so he can safely enjoy warm hugs all summer long.

Meantime, Elsa’s younger and more impetuous sister, Anna (Kristen Bell), is rejoicing that she now has all the people she loves best — including her loyal boyfriend, Kristoff (Jonathan Groff) and his trusty reindeer — happily co-existing under one cosy castle roof.

But as you may already have guessed, such contentment cannot last...

Elsa is haunted by a distant voice that only she can hear and that she can’t ignore.

Answering that enigmatic hero’s call will take all our favourite characters away on a perilous journey that will test Elsa’s powers to their limits.

“Frozen 2 is like the day after happily ever after,” says Jennifer Lee, who returns to co-direct with Chris Buck. “Life gets in the way. It throws you curve balls. So this is about learning to fight for your place in the world, do what’s right, all of the grown-up things you have to do. There’s still fun and humour but it’s a deeply emotional story about finding out who we are meant to be.”

The film also looks set to answer the question most often asked by fans, namely “How did Elsa get her icy powers?”

Of course, it wouldn’t be a Frozen film without spine-tingling, show-stopping ballads. Composers Kristen Anderson-Lopez and Robert Lopez, who won the best song Oscar for Let It Go, have conjured up seven new songs for audiences to savour.