Whodunnit’s fun for all the family 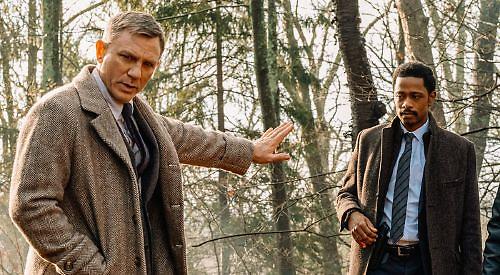 HE made his name writing and directing the 2005 neo-noir mystery film, Brick.

Ever since, the idea of giving the murder-mystery a fresh spin has been on Rian Johnson’s mind.

But other projects took precedence, as he went on to make The Brothers Bloom (2008) and Looper four years later, before being recruited to direct 2017’s Star Wars: The Last Jedi.

Now, though, comes a whodunnit that some are touting as the most intelligent piece of popular entertainment of the year.

Knives Out begins just after the grisly end of a birthday party: Harlan Thrombey, newly 85 years old, is found dead.

The famed mystery novelist leaves behind a large, dysfunctional family who must grieve in two parts — first, by shiftily answering the questions of detectives doubting Harlan’s alleged suicide, and second by discovering an amendment to Harlan’s will.

It appears his sizeable fortune will no longer be distributed evenly among all remaining living relatives. So begins a tooth and nail fight to get to the bottom of what happened to Harlan Thrombey and, more importantly, why such a seemingly wicked turn of events has befallen everyone else.

Johnson’s cast is plucked from a plethora of successful franchises and genre delights. He builds the Thrombey family across several generations, recognising the talents of rising actors Katherine Langford (Thirteen Reasons Why) and Jaeden Martell (It), before letting Michael Shannon, Toni Collette, Jamie Lee Curtis and Don Johnson run wild as the tier of embittered and egotistical elder children to Christopher Plummer’s Harlan.

Not forgetting Chris Evans as a perfectly clean-cut and vile exiled son, and the family table is all set...

As a detective film par excellence, Knives Out would be nothing without its detectives. Lakeith Stanfield puts in a refined performance as Lieutenant Elliot, doing his best opposite a transformed Daniel Craig.

With a twang and a swagger, Bond is now Benoit Blanc, the private investigator having a seriously good time unravelling this case with unparalleled caricaturish commitment.

As with all great whodunnits, everyone is a suspect, but even with the answers in hand, Knives Out never stops keeping an eye on the guilty ones who have somehow still managed to save their skins.

Knives Out is showing at the Regal Picturehouse cinema from today (Friday).