At last, a love story you can believe in 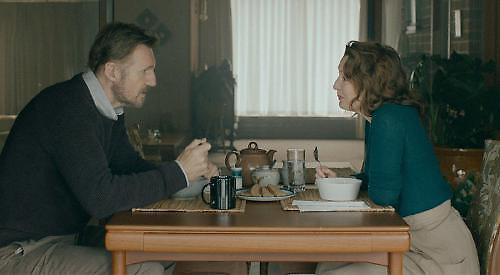 ORIGINALLY titled “Normal People”, Ordinary Love is an extraordinary look at what can happen when people’s lives are turned upside down by illness and loss.

Joan (Lesley Manville) and Tom (Liam Neeson) have been married for many years. There’s an ease to their relationship which only comes from spending a lifetime together, and a depth of love which expresses itself through tenderness and humour in equal part.

When Joan is unexpectedly diagnosed with breast cancer, the course of her treatment shines a light on their relationship as they face the challenges that lie ahead and the prospect of what might happen should the worst come to pass.

As the film’s quietly ironic title suggests, Ordinary Love is a story about love, survival and the epic questions life throws at each and every one of us.

With a screenplay by Northern Irish playwright Owen McCafferty, who made his name with 2003’s multi-award-winning Scenes from the Big Picture, Ordinary Love sees directors Lisa Barros D’Sa and Glenn Leyburn approach the story through an everyday lens.

Both retired, Joan and Tom live a life of comforting routines and habit, having finally come to terms with the death of their daughter many years before.

This day-to-day existence is troubled, however, by the sudden and devastating news that Joan has breast cancer.

Everything ordinary is turned on its head as the pair must navigate new eruptions of anger and fear, hospital bureaucracy and interminable waiting rooms.

Viewers used to watching Leeson in an action-film context should take pleasure in watching him in a more thoughtful, dramatic role.

She, meanwhile, is the film’s true beating heart, giving a sensitive nuanced performance that gives the lie to the idea that there is any such thing as an ordinary love.

Anyone familiar with Manville’s work in Mike Leigh’s All or Nothing (2002) and Another Year (2010) will know what she is capable of.

Film critic Jack Blackwell wrote of Ordinary Love: “Everything is completely believable, the relationship and the home clearly lived in, and it’s this that gives [the film] its quiet, but sometimes overwhelming, power.”