‘Sustainable’ pair really grow for it 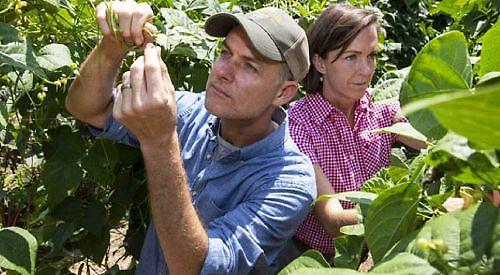 TACKLING serious issues on screen can be a tough sell for filmmakers — particularly if it’s about the environment.

Since many of us go to the cinema to escape, to get away from our everyday reality, you’d be forgiven for thinking that climate change wouldn’t be top of our list of must-see Friday night subjects.

Documentary-makers John and Molly Chester change all that in one fell swoop in this upbeat, thought-provoking and inspiring ride through a decade of life-swap.

Leaving the beaches of Santa Monica behind, the pair opt to restore a huge swathe of abandoned land north-west of LA and grow their own food.

In a bid to live the vision of self-sufficiency, literally everything they consume will be grown on their own land.

Filming every step of the way — John is a wildlife cameraman and Molly a chef — the pair are guided early on by a wise and likeably kooky local, Alan York, who understands the land like a native and designs a fantastic layout for the farm.

Together they put the word out on social media and soon have support from all over the world rocking up on their doorstep. Within a year, the barren, parched fields are green and sprouting life.

John’s voice, full of joy at what unfolds, guides us through the pair’s highs and lows, as his watchful eye witnesses the ecosystem at its most serene.

As animals are reintroduced to the land, it gradually begins to recover and flourish.

From boxes of chicks and ducklings to herds of cows and sheep and a prized bull bought at market, the farm is literally teeming with life before our eyes.

Molly and John are busily learning as they go along — and mistakes naturally occur. Coyotes pose a serious threat to livestock — they destroy scores of chickens — and a pig named Emma is struck down with a deadly illness. Gophers and snails eat away at fruit trees and torrential rain threatens to wash everything away. Then there’s the terrifying issue of the California wildfires.

It won’t come as a surprise to learn that the film has blown audiences away at festivals like Sundance.

Nature is a wondrous thing and can heal itself, given the right environment, in spite of the serious damage it may have suffered.

With human interest in abundance, The Biggest Little Farm carries a uniquely broad appeal for all walks of life and leaves us with a clear idea of how we too can make a difference in our daily lives.

The film is showing at the Regal Picturehouse cinema from today (Friday).