Space opera aims to go out on high note 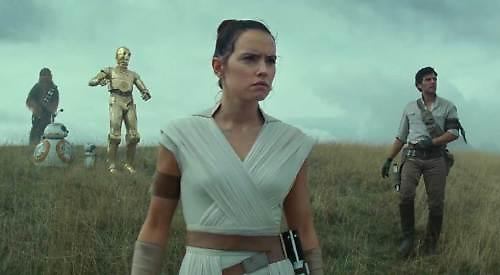 A CINEMATIC saga that started life when many of us were barely out of nappies is about to reach its momentous conclusion.

After 42 years, nine films and countless novels, comic books and video games, the Star Wars Skywalker saga is about to come to an end.

Not just the culmination of a trilogy, but a trilogy of trilogies, The Rise of Skywalker once again transports fans to a galaxy far, far away.

There’s thrilling action, breathtaking lightsaber duels, and the final battle for freedom — but it’s a very different galaxy to the one we first visited all the way back in 1977.

That’s where we met Luke, a humble farm boy with dreams of fighting the Empire. Over the course of three films we watched him join the Rebellion, become a Jedi, and finally confront the menacing Sith Lord, Darth Vader.

Next up, in his prequel trilogy, Star Wars creator George Lucas investigated the origins of Vader — from pint-sized podracer to tragic Dark Side-dabbling adult.

And what about Luke, Leia and Han? Was that the end of their fight. Had evil really been vanquished? The answer, it turned out, was no.

In 2015 the saga was reignited and The Force Awakens hit cinemas.

A new threat had arisen in the form of the militant First Order, and Luke Skywalker was missing.

Eventually, in 2017’s The Last Jedi, Rey tracked down Luke and learned the ways of the Force, before the rebels’ ranks were decimated by Kylo Ren’s armies in a battle on Crait.

Now, in Episode IX, the surviving members of the Resistance must face the First Order again.

They play Jannah — a new ally for Finn — and Allegiant General Pryde, who takes up residence on the bridge of Kylo Ren’s Star Destroyer.

Carrie Fisher passed away in 2016, but director JJ Abrams has confirmed that she will appear posthumously as General Leia. It’s the least you would expect of a film series that has at times made the impossible come true.

• The Rise of Skywalker is now showing at Henley’s Regal Picturehouse cinema.