Comedy brings out the best in Dickens 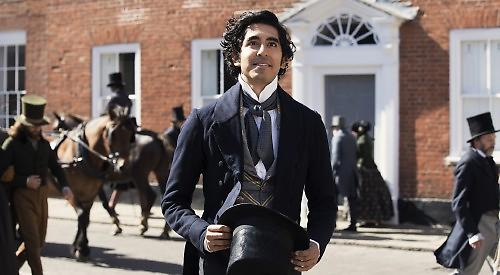 HE’S the acid wit behind such acclaimed political satires as The Thick of It and — on the big screen —
The Death of Stalin.

But this month Armando Iannucci is out to bring a little cheer to cinema audiences with a charingly lavish adaptatation of Charles Dickens’s novel David Copperfield.

Published in 1850, the book’s full title was The Personal History, Adventures, Experience and Observation of David Copperfield the Younger of Blunderstone Rookery (Which He Never Meant to Publish on Any Account).

With a star-studded ensemble cast comprising some of the best and brightest British talent around and a script full of wit and warmth written by Iannucci and his frequent collaborator Simon Blackwell, the film sets itself up as the perfect antidote to the winter blues.

Dev Patel takes on the titular role of perpetually unlucky young gentleman, David Copperfield, who is sent away from his lavish childhood home when his mother remarries.

Chronicling his turbulent journey from precocious youth to self-assured adulthood, the film is a coming of age story with a contemporary flourish.

Far away from any perception of Dickens’s work as old-fashioned or stuffy, Iannucci breathes new life into a classic story, remaining faithful to the maverick spirit of the original text while ensuring this new version has an identity of its own.

He told Deadline magazine: “I’ve never seen a Dickens adaptation that has celebrated the language, the dialogue and the comedy. Really, everything is too reverential.”

By contrast, humour is at the heart of this version.

Best known for his dramatic roles in Slumdog Millionaire and Lion, Dev Patel captures Copperfield’s naivety and vulnerability, as well as delivering the wit of Iannucci’s script so well it almost seems effortless.

He easily goes toe to toe with British comedy legend Hugh Laurie, who plays the kite-loving oddball Mr Dick, and Peter Capaldi as the kindly but impish Mr Micawber.

With an ensemble this talented, it’s hard to pick a favourite, but Iannucci and Blackwell are careful to give each of Dickens’s characters plenty of time to shine.

• The Personal History of David Copperfield is showing at Henley’s Regal Picturehouse cinema from today (Friday).