Children’s presenter was a real-life hero 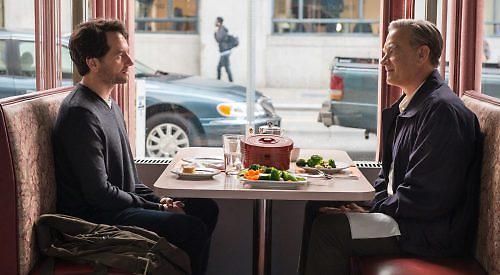 NOT a lot of people know this, but some of the most memorable films in the history of cinema have been based on magazine articles.

Now comes A Beautiful Day in the Neighborhood, inspired by the 1998 Esquire cover story “Can You Say ... Hero?” by Tom Junod.

Directed by Marielle Heller, the film has already seen Tom Hanks nominated for an Oscar and a Bafta for best supporting actor.

The year is 1998 and Lloyd Vogel, an award-winning but cynical Esquire feature writer, is attending his sister Lorraine’s wedding, along with his wife, Andrea, and their newborn son, Gavin.

During the reception, Lloyd starts a fistfight with his estranged father, Jerry, over memories of Lloyd’s mother, whom Jerry had abandoned.

The next day, Lloyd’s editor assigns him to interview American television icon Fred Rogers, the affable creator, showrunner and host of the educational preschool TV series Mister Rogers’ Neighborhood, for a 400-word article about heroes, as each of the other potential heroes turned down chances to be interviewed by him.

Lloyd travels to the WQED studio in Pittsburgh to interview Rogers. During the interview, Rogers is dismissive of his fame and displays concern for Lloyd’s nose injury, prompting a discussion in which Lloyd relates to Rogers the issue of his relationship with his father, whose apology and attempt at reconciliation Lloyd has rebuffed.

Determined to expose Rogers’s nice persona as an act, Lloyd watches several episodes of Rogers’s show, but is unable to discern anything. Lloyd interviews Rogers again when he visits New York.

During the interview, Rogers dodges Lloyd’s questions and reminisces about raising his two sons. He takes out his puppets and asks Lloyd about his childhood stuffed rabbit and his father, provoking Lloyd into ending the interview.

Lloyd subsequently arrives home to find Jerry and his girlfriend Dorothy there talking with Andrea.

Lloyd berates Jerry for cheating on his mother Lila while she was dying of cancer. He orders him to leave, but events take a sudden and unexpected turn that — inspired by his encounters with Rogers — prompts Lloyd to reexamine his attitude to his parents.

Many movies will make you laugh, weep or think. But only a few will make you want to be a better person. A Beautiful Day in the Neighborhood is one of those films. It is now showing at Henley’s Regal Picturehouse cinema.