Silent-film quartet want to take you back in time 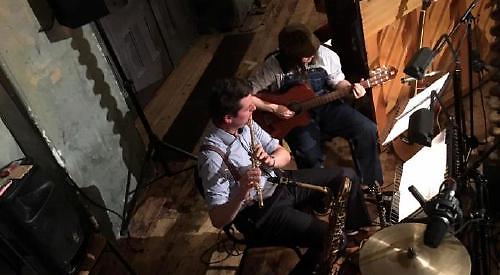 IT wasn’t so long ago that silent movies were still a regular feature on terrestrial television.

There’s an entire generation that grew up in thrall to the tie-twiddling of Oliver Hardy, the stunts of Harold Lloyd, and the classic imagery of Charlie Chaplin.

And that generation is not as old as you might think.

That said, with the great names of silent cinema no longer being a mainstay on TV, there’s a risk that the genius of the silent era stars could become all but forgotten.

Thankfully, stepping into the breach at the Kenton Theatre next Friday night (February 14) are Emily O’Hara and Lucky Dog Productions.

They are visiting the New Street venue to stage a special screening of Buster Keaton’s classic 1924 silent comedy Sherlock Jr — plus a handful of short films from the pioneering age of cinema.

Of course, silent movies were never really silent. They were accompanied by live music. And that’s where Emily and her band come in.

“We do our own original scores, but they’re era-specific,” she explains. “Because we all specialise in music from the 1890s to the Thirties, we do our best to recreate the sounds and the tunes that you would have heard from the time that the film was being shown. The idea with our shows is that you step into a working Twenties cinema. We want to be able to transport people back in time.”

Lucky Dog’s Picturehouse Quartet formed in the wake of the vintage scene that embraced the culture of the Twenties and Thirties.

The group features Emily on strings (guitar and banjo), with Daniel Mays on woodwind (saxophone and clarinet), Christopher Eldred on piano and Nicholas D Ball on percussion.

“People were getting interested in the Twenties and Thirties and we were getting quite a few gigs from that,” says Emily, who is also the quartet’s musical director.

Emily’s own interest in silent film only started fairly recently. “Going back eight years, in my ignorance, I’d never seen a silent film before,” she laughs. “I decided to buy a projector off eBay and we put on an event in East London where we chose some titles just at random. We had no idea what we were going to see.

“The Lucky Dog, which is from 1920 and is the first film featuring Stan Laurel and Oliver Hardy together, was the first title that we showed — and we took our name from there.”

There’s another title that is equally important to Emily. She’s incredibly enthusiastic about her subject, but when she talks about The ‘?’ Motorist she becomes particularly animated.

“It’s by a British guy called RW Paul and it’s from 1906. It’s a wonderful little sci-fi film that features a car that’s being chased by a policeman. The car goes up a wall and off into space. It really captured my imagination.”

It’s a film that the Lucky Dog ensemble also accompanied at the British Film Institute as part of the Loco Film Festival where they worked with the head of silent film, Bryony Dixon.

“She’s brilliant,” says Emily. “She found all of these wonderful films that hadn’t seen the light of day for 100 years or more. She showed us one that turned out to have been made in West Croydon, which is where I live. So I’ve taken a lot of pride in this fact.”

Next Friday’s show at the Kenton starts at 7.30pm and has a running time of 110 minutes, including a 20-minute interval.

“Sherlock Jr is one of the first films that Nicholas and I attempted to score together,” says Emily, explaining Lucky Dog’s choice of Buster Keaton’s classic.

“It’s a film that we’ve loved for a very long time. It’s also one of Keaton’s most loved films. He was the director, producer, and he had his finger in a lot of pies when it came to Sherlock Jr.”

In terms of creativity, movie-making technique and artistic vision, Sherlock Jr is a masterpiece and well ahead of its time.

“It employs so many classic gags, like the pool scene,” she says. “There’s some great special effects in this movie too, which I think people will get a kick out of.

“He also broke his neck in the process of making it, but I guess he didn’t realise at the time because he finished the scene — it’s the one with the water hose. Keaton’s pretty hardcore!”

Joining Sherlock Jr on the bill is a collection of comedy shorts from as far back as the 1890s that will make you think twice about the Victorian era’s stuffy image.

“Keaton is our biggest name but we have a guy called Clyde Cook too,” says Emily. “He often played a little tramp character and we’ll be showing a film of his called The Misfit which is from 1924.

“He displays some fantastic physical comedy and it’s very similar to the sort of thing you’d find in Dad’s Army.

“His character is very hen-pecked at home and decides to go and join the army, but of course does terribly there as well!”

If Clyde Cook isn’t a name that you recognise, then be prepared to have your knowledge of cinema expanded further by Lucky Dog.

“We always like to shine a light on some of the smaller actors, many of whom started their careers as Charlie Chaplin impersonators,” says Emily. “So we’re trying to show some films that maybe people weren’t so aware of, or hadn’t seen before.”

Whilst the band accompanies the movies, Emily is keen to point out that they are not the focal point of their shows.

“The scores are completely littered with cues, but we also have open sections where we improvise over a jazz melody, usually within chase scenes. The film will tell us what we need to do, and if we’ve done our job right you’ll forget we’re there at all.”

Silent films exist in a different world to the majority of modern day movies. The way in which they communicate is entirely different, with the most notable exception in recent years being 2017’s The Shape of Water, which embraced the physicality of the silent movie era.

“The thing I like about silent film is that in theory you should be able to enjoy it with anybody in the world,” says Emily. “If it’s done correctly, it should surpass language — it should be its own language. If you show one of these films, it doesn’t matter where you come from, you should be able to understand it from the acting alone.” She laughs. “I hope that doesn’t sound pompous!”