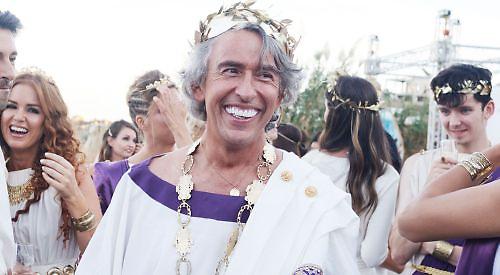 IT was only a matter of time before a thinly-veiled parody of Sir Philip Green would be committed to film.

In doing so he looks to expose the grim inequality in the industry between those who make the clothes and the fashion bosses.

McCreadie, who is played by Steve Coogan, had a successful high street business but found himself in front of a parliamentary select committee.

Desperate to save his reputation, he is determined to throw the ultimate ancient Rome-themed bacchanal, complete with fake amphitheatre, on the Greek island of Mykonos to mark his 60th birthday.

But as the guests start arriving, including his mother (Shirley Henderson) and ex-wife (Isla Fisher), in whose name all his tax-avoiding profits were registered in Monaco, McCreadie’s empire starts to crumble. Also featured is Sex Education star Asa Butterfield as McCreadie’s resentful teenage son Finn and comedian David Mitchell plays Nick, a journalist enlisted to write the mogul’s life story who ends up discovering some uncomfortable truths about how he made his fortune.

Indeed, it’s not surprising that Greed is hardly subtle and Winterbottom makes his own thoughts very clear.

At the party, McCreadie has employees who are required to dress as slaves to create a stark contrast between them and the guests.

Then when a boatload of Syrian refugees threatens to ruin the view of his guests, McCreadie demands that they be removed. He says: “They’ve come a long way; they won’t mind going a bit further.”

The original version of the film ended with a grim look at reality. Audiences were to be told how much garment factories earn in-comparison to the rich businessman at the top of the chain but Sony Pictures International told Winterbottom to remove them out of concern “about the potential damage to Sony’s corporate relations with these brands”.

Greed is chiefly a film about inequality and its budget is a case in point. The cost of the entire production was £5m. This is less than the amount Green spent on his actual 60th birthday celebrations in Mexico, believed to be £6.5m.

Greed is showing at the Regal Picturehouse in Henley from today (Friday).