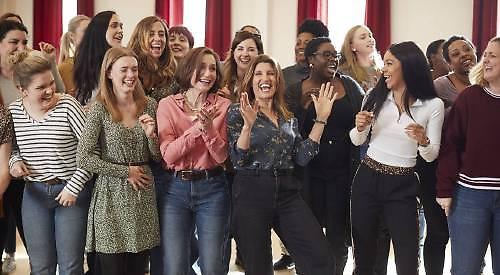 THE director of the 1997 smash-hit The Full Monty is back with a new film inspired by the true story of the Military Wives Choirs who featured in the popular BBC Two series The Choir.

Peter Cattaneo’s Military Wives tells the story of a group of women who, with their partners away serving in Afghanistan, form a choir and quickly find themselves at the centre of a media sensation that spawns a global movement.

Life on a military base can be uneventful, especially for the wives who are left behind when their partners are called to duty.

Kate (Kristin Scott Thomas) is one of these women, bearing the stress and monotony with grace and forebearance.

As the long-standing chair of the social committee, Kate has a hard time stepping away when newcomer Lisa (Sharon Horgan) is appointed in her place.

The two women have very different definitions of social activities: Kate wants the group to continue with her busy calendar of book clubs and community work, while Lisa prefers to find any excuse for a glass of wine.

When the idea of starting a choir is first broached, the women theoretically find common ground — even if they don’t always see eye to eye on how to approach the project.

Nonetheless, as the group begins to practise, they soon discover that the joy of singing is infectious and the first military wives choir is born.

Discovering that they can rely on each other for more than beautiful harmonies, the members come together to confront the challenges of having a partner at war, to face the uncertainty of their fates, and to acknowledge how much of their identity is wrapped up in their husbands.

Inspired by the international phenomenon of military wives choirs, Peter Cattaneo crafts an emotive and poignant story about a group of women who realise that their partners in Afghanistan aren’t the only ones whose circumstances can lead to unbreakable bonds of camaraderie, belonging, and deep friendship.

In real life, the Military Wives featured in the fourth series of The Choir, which began airing in November 2011 and included a performance at that month’s Royal British Legion Remembrance service at the Albert Hall.

Such was the success of the programme that the following month saw the Military Wives secure the Christmas number one spot with their single Wherever You Are — a song specially written for the programme by composer Paul Mealor.