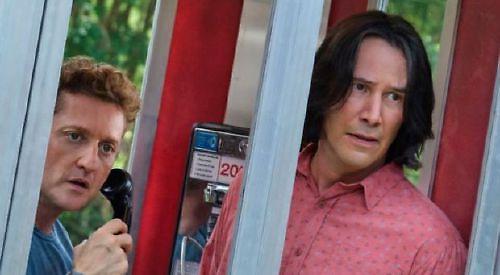 BILL & Ted Face the Music has been more than a decade in the making and this third outing in the cheerful saga comes to the Regal Cinema in Henley today (Friday).

Alex Winter is Bill, Keanu Reeves is Ted and like the other two films, this is written by Chris Matheson and Ed Solomon.

It is directed by Dean Parisot, who is renowned for the sci-fi comedy Galaxy Quest, and is rated PG.

Now middle aged, Bill and Ted’s band, Wyld Stallyns, is no longer popular and their focus is now on their music-mad daughters, Thea (Samara Weaving) and Billie (Brigette Lundy-Paine), who are weirdly similar to their old man.

Crisis arrives when Bill and Ted are summoned into the distant future by Kelly, and informed by the universe’s Great Leader that they have to compose a great track to bring the world together and prevent the destruction of space and time.

The boys, confident that they can do it, but unwilling to go through it, decide to time-travel forward to the point when it has been done and snatch the composition from their future selves.

But the Great Leader has an alternative plan to save the world, simply to kill Bill and Ted, for which she has trained a neurotic robot assassin called Dennis.

While Bill and Ted have bizarre encounters with their own variously transformed selves, Thea and Billie assemble their own supergroup on their dads’ behalf.

They travel back to the Sixties and recruit Jimi Hendrix (DazMann Still), to the Twenties to pick up Louis Armstrong (Jeremiah Craft) and then to 18th-century Salzburg to enlist Mozart (Daniel Dorr).

Bill and Ted’s Peter inability to accept the ageing process is enjoyably surreal and provides sweet journey backwards and forwards down memory lane.

Also showing this week is the re-release of black comic thriller Memories of Murder (rated 15) from 2003.

Director Bong Joon-ho, who won an Oscar for film Parasite, bases the film on the Hwaseong serial murders of the late Eighties, which remained unsolved until this film came out.

Its release sparked a renewed upsurge of interest in the case, which led to the identification of murderer last year. He was already serving a life sentence for the murder of his sister-in-law in 1994.

Song Kang-ho (the dad from Parasite) plays the cynical Inspector Park and his sidekick is Inspector Cho (Kim Roe-ha), who beats suspects and uses a special overshoe to put on his boot when he wants to kick someone to avoid leaving a mark.

A young officer transferred from Seoul, Inspector Seo (Kim Sang-kyung) is more professional but, like his colleagues, is hopelessly out of his depth. The crime scene itself is chaotically compromised, with press and public barging all over the place and the incompetent cops unable to stop them and settle on trying beating confessions out of fantasists.

Memories of Murder is a satire of the arrogance of officialdom.

Also showing is The Roads Not Taken (rated 15), which follows a day in the life of Leo (Javier Bardem) and his daughter, Molly (Elle Fanning) as she grapples with the challenges of her father’s chaotic mind.

Meanwhile, Tenet (rated 12A), is still showing. It stars John David Washington, who is known as “the Protagonist” and is on a mission to save the world.