Naturalist has a wild solution for environmental problems 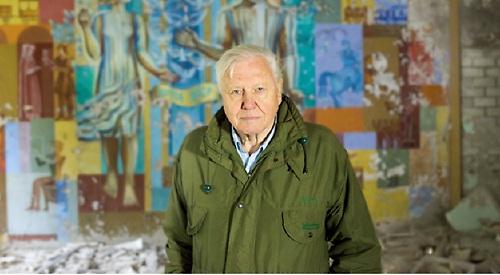 AT 94, David Attenborough is perfectly positioned to sound the alarm on the environmental chaos that has been unleashed on the planet.

Our elder statesman of the natural world has observed the slow decline of biodiversity over his long career — spanning more than 60 years since his expedition to Sierra Leone for the BBC back in 1954.

He charts these dramatic changes in his new film,
A Life on Our Planet, which is showing at the Regal Picturehouse this week.

We watch in the eerie opening scene as Attenborough treads through the broken glass of a deserted classroom in Pripyat, the city that was devastated by the 1986 explosion of the Chernobyl nuclear reactor.

The disaster serves as a metaphor for the spiralling decline of our planet’s biodiversity, which Attenborough calls “the true tragedy of our time”.

The film carries with it the familiar Attenborough trademarks we all know and love: the soothing, rich voice; the extraordinary cinematography showing the natural world in all its splendour; the rousing soundtrack.

But this film is a radical departure from his previous work. Attenborough describes it as his “witness statement” — a reference to the ‘crimes’ the human race has inflicted upon the natural world.

The film takes on an uncharacteristically alarming tone, and it is a deeply personal account, with moments where Attenborough looks almost broken with emotion. He warns us: “We’re facing nothing less than the collapse of the living world.”

The tone is bleak as Attenborough paints a picture of an increasingly chaotic world. The Amazon rainforest on track to become a dry savannah by 2030, wreaking havoc with the global water cycle. Coral reefs dying and fish populations crashing by the 2050s. Global food security crises and unpredictable weather patterns by the 2080s. Vast swathes of the world uninhabitable with millions homeless by 2100.

But we are reassured when our narrator tells us that the solution is “quite straightforward”, adding: “We must restore biodiversity. We must
re-wild the world.”

We return to Pripyat at the end of the film, and witness how the forests have engulfed the abandoned city, now devoid of human life except for our visitor.

I was mindful of Attenborough’s great age and wisdom, and how this is likely to be his final work.

As we watch our national treasure disappear under the cover of the trees and the camera zooms out, he reminds us that “a species can only thrive when everything else around it thrives too. If we take care of nature, nature will take care of us.”