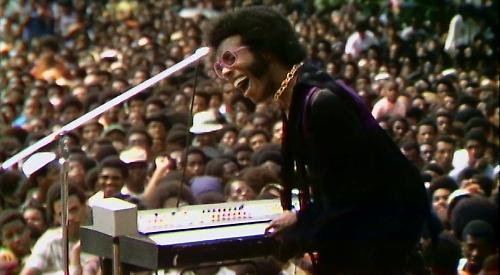 EVERYONE remembers the Woodstock festival of August 1969, even — or perhaps especially — if they weren’t actually there.

But what was much less well remembered until now is that just 100 miles away that same summer, another groundbreaking cultural happening was taking place.

More than 300,000 people attended the event — comparable to Woodstock’s reported 400,000 — yet it received virtually no coverage from the mainstream media.

But the festival was filmed, with around 40 hours of unseen footage remaining in storage for the next 50 years.

This has now formed the basis of a new documentary, Summer of Soul, directed by Ahmir “Questlove” Thompson, that is showing at Henley’s Regal Picturehouse cinema from today (Friday).

Legendary artists whose performances were captured include Stevie Wonder, Sly and the Family Stone, Nina Simone, BB King, the Staple Sisters, Ray Barretto and Gladys Knight and the Pips.

These are interwoven with a series of revealing interviews for a salutary reminder that back in 1969 not all revolutions were being televised.

Other films arriving this week include Octonauts: Life in the Ocean, The Shammies, and The Snail and the Whale.

Continuing from last week are Another Round, Black Widow, In the Heights, Nowhere Special and Peter Rabbit 2: The Runaway.

On Tuesday at 8pm there is a one-off showing of Lady Boss: The Jackie Collins Story. And on Thursday at 6.30pm there is a screening of music documentary The Sparks Brothers, telling the story of Ron and Russell Mael, followed by a live question and answer session with director Edgar Wright.