It’s time to dig out those proton packs 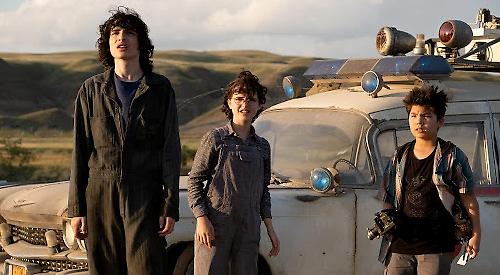 ONE of the longest-awaited sequels in Hollywood history is now showing at Henley’s Regal Picturehouse cinema.

Unlike 2016’s female-led Ghostbusters: Answer the Call, which was a remake of the original 1984 summer blockbuster, Ghostbusters: Afterlife continues the story from where 1989’s Ghostbusters II left off.

The Ghostbusters are back, but more than 30 years on the action is taking place in small town Oklahoma rather than Midtown Manhattan.

Penniless single mum Callie (Carrie Coon) and her two kids Trevor and Phoebe (Finn Wolfhard, McKenna Grace) are forced to move to a crumbling farmhouse left to them by their late grandfather.

The children promptly retreat to their screens to ward off this fresh hell.

But the tiny town of Summerville doesn’t stay boring for long.

It turns out that Grandpa was Ghostbuster Egon Spengler, whose supernatural adventures have largely been forgotten by the modern world.

So when something strange hits the neighbourhood, the kids and their friends, alongside their helpful teacher Mr Grooberson (Paul Rudd) must dust off those proton packs to save the day. Also showing this week is King Richard, starring Will Smith as the father of tennis champions Venus and Serena Williams.

Driven by a clear vision of the future and some at times unconventional coaching methods Richard has a plan — to take his daughters from the streets of Compton, Los Angeles, to the global stage.

The two girls are extraordinarily gifted tennis players and — with their father’s guidance as they grow and evolve — end up changing the sport of tennis for ever.

Continuing from last week are Dune, Mothering Sunday, No Time To Die, Spencer and The French Dispatch.

Tonight (Friday) at 8.45pm there is a chance to enjoy a surprise film with a 15-rating and a running time of 120 minutes.

Meanwhile, the Regal Picturehouse has also unveiled its festive season, which is running throughout December and into the start of the New Year.