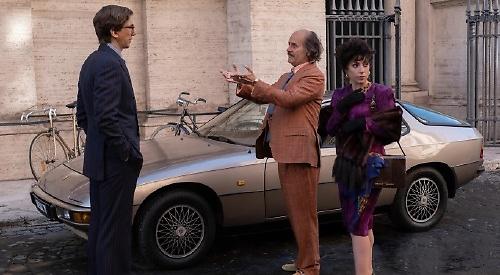 A FILM that claims to lift the lid on the inner workings of the Gucci fashion dynasty is showing at the Regal Picturehouse cinema from today (Friday).

Directed by Ridley Scott, House of Gucci stars Lady Gaga as Patrizia Reggiani, an outsider from humble beginnings who romances Adam Driver’s Maurizio Gucci and marries her way into the super-wealthy clan.

The family business holds little allure for the bookish Maurizio and the real power is held by his father Rodolfo (Jeremy Irons) and his uncle Aldo (Al Pacino).

In classic divide and rule style, if a newcomer like Patrizia wants to be a true force at Gucci she will have to pit the rest of the family against each other.

But when her unbridled ambition begins to unravel the family legacy it triggers a spiral of betrayal, decadence and revenge that eventually leads to murder.

Also showing from today is Disney animation Encanto, which tells the story of the Madrigals, an extraordinary family who live hidden in the mountains of Colombia. A wondrous, charmed place, their dwelling place is known as an encanto and has blessed every child in the family with a unique gift — from super strength to the power to heal.

Every child, that is, except Mirabel (voiced by Stephanie Beatriz). But when she discovers that the magic surrounding the encanto is in danger, Mirabel decides that she, the only ordinary Madrigal, might just be her family’s last hope.

Continuing from last week are Ghostbusters: Afterlife, Mothering Sunday and No Time To Die.

On Sunday at 11.30am there is a chance to see Yasujiro Ozu’s 1953 classic Tokyo Story, which was voted the greatest film of all time in a 2012 poll of film directors.

On Thursday at 6pm there is a screening of Final Account. Thirteen years in the making, this is a documentary portrait of the last living generation of everyday people who were part of Hitler’s Third Reich.