Magic of the Serkis 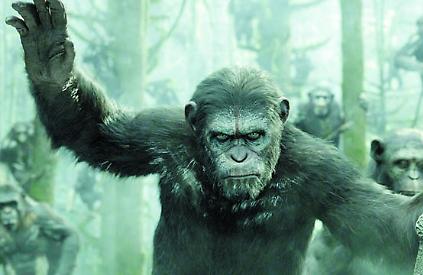 Andy Serkis, the actor who made his name when he played Gollum in Lord of the Rings, returns to the art of motion capture as he embodies, and provides the voice for, a primate called Caesar in this sequel to the 2011 hit Rise of the Planet of the Apes.

Serkis’ performance has been hailed as “extraordinarily expressive” in this movie, whose makers claim to have taken motion capture and 3D to new levels.

The plot concerns the prospect of a war brewing between man and ape, 10 years since Simian Flu wiped out most of humanity. In woods near San Francisco, Caesar and his fellow apes have established a thriving community.

By contrast, the human survivors, whose leader Dreyfus is played by Gary Oldman, are running short of power supplies.