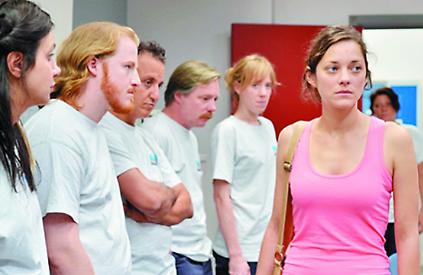 THIS French language film tells the story of a woman who, together with her husband, tries to convince her colleagues to sacrifice their annual bonuses in order for her to keep her job.

Sandra (Marion Cotillard) plays a low-paid worker at a solar panel factory who returns from sick leave to find that her job is being axed and that everyone else is to get a 1,000-euro bonus.

The boss refuses to back down but agrees to abide by a secret ballot, giving Sandra until Monday morning — the time frame of the title — to visit all her co-workers and persuade them to turn down the extra cash and see her reinstated.

Sandra needs to get more than eight of a 16-person workforce to agree to give up the much-needed cash, with the reactions of her workmates varying from abject contrition to resentful violence.

Through the course of this gripping and suspenseful drama a complex pattern of relationships is drawn out, under the shadow of a cavalier, cynical system that has forced this appalling choice on people in order to shift the blame from management.

Two Days, One Night received rave reviews after its premiere at this year’s Cannes Film Festival, and Cotillard’s performance in particular was highly praised. The film won the Sydney Film Prize at the Sydney Film Festival “for its masterfully elegant storytelling, its dedication to a fiercely humanistic, super-realist worldview, its brave, essential commitment to community solidarity, and its celebration of a woman’s power and vitality,” according to jury president Rachel Perkins. This is a talking-point movie, an outstanding lead performance, and a story which begs the question, what would you do?