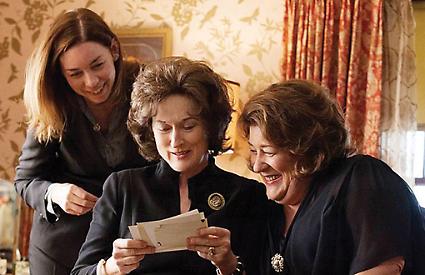 THERE is enough dysfunction in the Weston family of Oklahoma to keep a shrink in pocket for his entire working life, and this film version of the Pulitzer-winning play of 2008 by Tracy Letts brings it to life with a stellar cast, many of whom have been nominated for Oscars.

The family matriarch, Violet (Meryl Streep), is in the throes of treatment for throat cancer. She’s a prescription-drug addict and suffers violent mood swings, though as the story unravels it seems clear these two factors can’t really be pinned on her illness — she’s a pretty bitter creature at heart, anyway. In fact, this character makes Streep’s infamous Miranda Priestley in The Devil Wears Prada look like a total pussycat.

When she finds her 69-year-old husband Beverly missing, she summons her three daughters home for moral support. Beverly (Sam Shepard), a former poet who’s now making a secondary career from the bottle, is suspected of killing himself.

Once his boat is found gone, the trio of daughters gather to assess the situation and it’s clear their mother’s malaise has passed down through the genes.

Big sister Barbara (Julia Roberts), a college professor, has not been home to mum for years, and though she’s come with husband Bill (Ewan McGregor) it’s clear their marriage is on the rocks.