Street cat's starring in his own movie 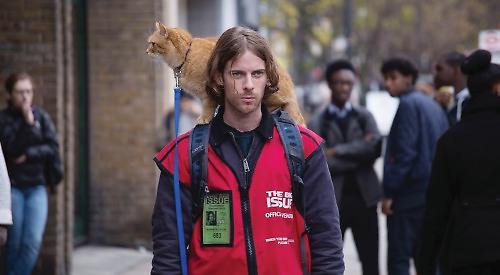 IN this adaptation of James Bowen’s bestselling autobiography, Luke Treadaway stars as a recovering heroin addict who befriends a fellow stray — a street cat he names Bob.

Having been moved into sheltered accommodation by his social worker, played by Downton Abbey’s Joanne Froggatt, Bowen comes across the injured feline in his hallway.

Even though he is barely able to afford food for himself, Bowen decides to nurse the cat back to health.

The ginger cat is christened Bob and the pair quickly form an unlikely friendship on Bowen’s road to sobriety.

The story of their life-affirming relationship is bound to leave audiences tearing up, just as happened with readers of the book.

Five years on from first meeting Bob, the real James Bowen signed a book deal to publish his autobiography, A Street Cat Named Bob, which went on to sell more than a million copies in the UK alone. Now film director Roger Spottiswoode, who helmed James Bond’s 1997 outing Tomorrow Never Dies, has adapted the bestselling book.

Filming took place over six weeks in London, based in the real locations that Bowen and Bob used to busk at in Hackney, Soho, and Islington.

To add to the film’s authenticity, the title role is played by the real-life Bob after he proved himself the most qualified cat for the job.

Initially Bob was not planned for the role, but he outshone the other furry candidates during the filming of a busking scene in Covent Garden. With the help of some stunt doubles, Bob certainly steals the show in his own life story.

Olivier award-winning actor Luke Treadaway shot to fame with his performance in The Curious Incident of the Dog in the Night-Time (2013) as well as appearances in Second World War drama Unbroken (2014) and Hollywood blockbuster Clash of the Titans (2010).

The film is ideal viewing if you’re looking for a thoroughly heart-warming tale of friendship — and it is not just for cat people but animal lovers everywhere.