E.T. for adults is a bit of a departure 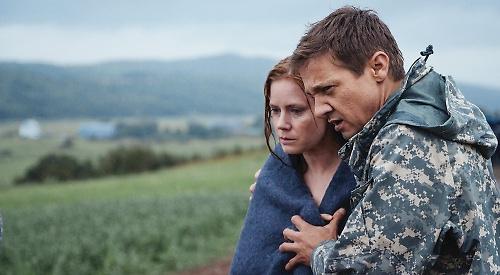 DIRECTOR Denis Villeneuve’s mysterious sci-fi thriller is released this week and is bound to keep audiences on their toes.

Based on the award-winning short story Story of Your Life by Ted Chiang, Villeneuve’s adaptation tells the story of a linguist who leads a team to investigate one of 12 mysterious spacecraft that have arrived to Earth.

Arrival sees five-time Academy Award nominee Amy Adams take on the lead role as workaholic scientist Dr Louise Banks, who is recruited by the US military to make first contact with the alien visitors.

As a linguistic expert she is charged with the task of forging communication with Earth’s extraterrestrial guests.

But as paranoia grows around the globe, the team must race against time to understand the truth before humanity’s destructive nature takes matters into its own hands.

However, as they struggle to find answers, Banks soon realises that she will have to take a risk that might threaten all of humanity as we know it.

Adams, 42, is best known for her more serious roles in American Hustle (2013) and Doubt (2008), yet she is no stranger to sci-fi and can be found most recently having starred in big blockbuster films including 2013’s Man of Steel and Batman v Superman: Dawn of Justice.

Her turn as Lois Lane showed she has a talent for bringing complexity to typically less character-driven films.

In Arrival, Adams’s talented co-stars include fellow Academy Award nominee Jeremy Renner, (nominated for best actor for The Hurt Locker, 2008) and Forrest Whitaker, who won the best actor award for his powerful portrayal of Idi Amin in The Last King of Scotland (2007).

Villeneuve, whose previous films show a penchant for dark, edgy thrillers, demonstrates that the sci-fi genre is actually more about mankind than aliens.

Arrival focuses less on its interstellar characters and instead concentrates on humanity’s reaction to something foreign and unknown, exploring what makes us human.

Arrival is showing at Henley’s Regal Picturehouse from today (Friday).