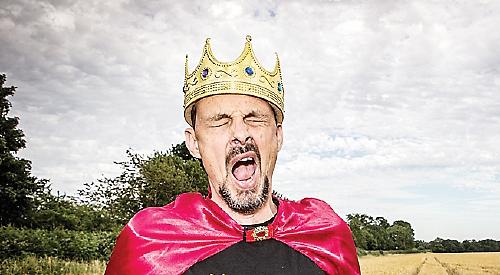 A COMEDIAN turned law lecturer from Peppard who took on the corporate might of fashion giant French Connection has made a film about his 16-year legal battle with the company.

Dave Griffiths, 47, has previously toured the comedy circuit to rave reviews with his C U in Court show about the case, which the Henley Standard has previously reported on.

Now he has turned the literally David versus Goliath story into a film — and is inviting readers to attend a free screening in London on Wednesday (November 30).

The trouble started back in 2000 when Dave did a gig at the Comedy Store in Leicester Square wearing a T-shirt that read “King Cnut” on the front and “French Correction” on the back.

Unfortunately, someone from French Connection was in the audience and reported it to his bosses. Within a week, Dave had received a legal letter claiming breach of copyright and trademark infringement. It also threatened an injunction and criminal proceedings if he wore the T-shirt again.

“I could have ended up in jail,” he says. “Although you could say I got the last laugh. Instead of caving in, I turned the tables on them when I discovered that French Connection themselves were in fact breaching the copyright of some of the biggest brands in the world — including the Ford and Mars logos. Another KFC-inspired design read ‘Finger Lickin’ Great — FCUK.’ ”

In total, Dave found 25 companies that had had their logos used by French Connection.

“I saw them using other people’s designs and started calling round companies like Pepsi, Coca Cola, Durex and IBM to tell them I believed French Connection was infringing their copyright. Once the first company complained to French Connection, and that led to a withdrawal and apology, it became an obsession. I even roped in my mum to take delivery of the French Connection catalogue after the company refused to send it to me!”

Meanwhile, Dave’s own T-shirt ranges, produced under the brand name King Cnut — the Danish spelling of the English king Canute’s name — were starting to make money. French Connection even tried to copy one of his designs.

“When that happened, I simply sent them the legal letter they had first sent me and after some legal wrangling the T-shirt was pulled.”

The legal dispute is now resolved, but Dave’s range of “CNUT” T-shirts now also bear the slogan “Turning back the corporate tide.”

His film, King Cnut, is showing at the Westminster Law School in Little Titchfield Street, W1W 7BY, on Wednesday (November 30). Doors open at 6pm and the film, which runs for 78 minutes, starts at 7pm.

For more information on the screening and to register for a free ticket, visit www.westminster.ac.uk/
events/king-cnut-screening

For more on the documentary, visit haeonline.com