Scouts given money towards new roof on their leaking hut 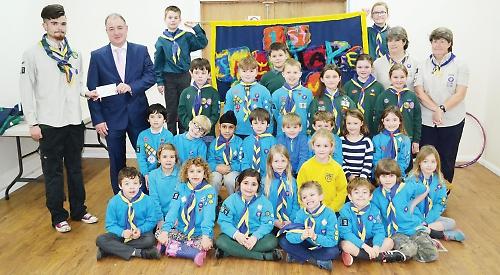 SHIPLAKE scouts have received £1,371 towards a new roof at their headquarters.

The money was donated by Henley Round Table and raised during its annual Santa’s sleigh door-to-door collections around Shiplake, which the scouts helped with.

Chairman Trevor Michel said: “The scouts always help us with our collections so we felt it was only fair for them to benefit from it. Most of our own children have been through the scouts, cubs and beavers and we feel it is a valuable asset to the community and worthwhile cause to support.

“We know how hard it is for these organisations to get money so we were very happy to help.”

The felt roof on the scout group’s hut in Shiplake Row is leaking and could eventually collapse. If the building was deemed unsafe, the group would have nowhere else to go.

The group has more than 40 beavers, cubs and scouts and has been meeting at the purpose-built premises for about 20 years.

The new roof will cost at least £5,000 and perhaps twice that as the full extent of the damage is not yet known.

Debs Boughey, who helped found the group, said: “We’re in a very frustrating situation because we don’t yet know the full cost so it’s hard to get funding but we will keep trying.

“ We’re very grateful for Round Table’s support. It’s a wonderful donation.” The scouts are seeking grants from local authorities and community organisations. So far they have raised just over £3,500 with grants from the John Hodges Charitable Trust and the Christopher Laing Foundation.

A children’s Halloween party at the Baskerville pub in Shiplake raised £465. Any extra money raised will go towards general improvements, such as redecorating or a new patio.