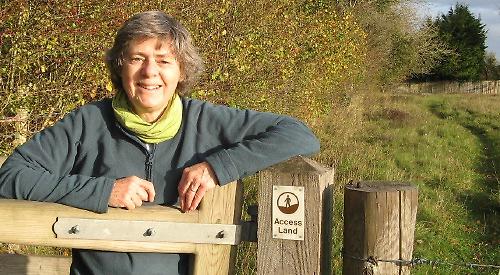 COUNTRYSIDE campaigner Kate Ashbrook has been shortlisted for an award.

She is one of 11 nominees for The Great Outdoors magazine’s extra mile award, which is voted for by the public.

Miss Ashbrook, who lives in Turville, is general secretary of the Henley-based Open Spaces Society, which campaigns to protect Britain’s footpaths and green spaces.

She has led society, Britain’s oldest conservation body, for 33 years and is a vice-president and vice-chairwoman of the Ramblers and patron of the Walkers are Welcome Towns Network, which Henley is considering joining. Miss Ashbrook said: “The extra mile is the one that matters. We already have some public paths and some right to roam access but there is much more to be won. That’s the extra mile.”

Voting closes on November 15 and winners will be announced at the beginning of December.

The Open Spaces Society has published a book to celebrate public paths. Written by its chairman, Graham Bathe, Public Paths explores the origins of ancient tracks, droves, bridleways and footpaths which make Britain unique. The book costs £5 and is available from www.oss.org.uk/
what-we-do/publications