RNLI given £1,500 from half marathon proceeds 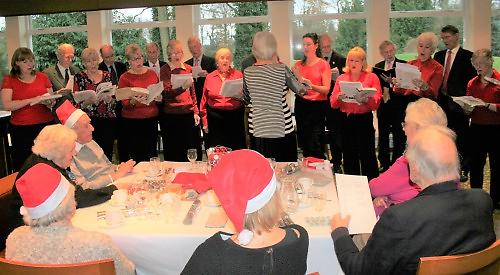 MEMBERS of the Rotary Club of Henley Bridge were joined by partners and guests for their Christmas dinner at Badgemore Park Golf Club.

They were served a traditional turkey dinner and mince pies and entertained by the Henley Carol Singers.

After the meal, club resident Ian McGaw presented a £1,500 cheque to the RNLI to Tony Hobbs, president of the charity’s Henley fund-raising group.

The money was part of the £21,000 raised by this year’s Henley half marathon, which is organised by the club.

Rotarian Paul Harrison said that more than 1,000 runners took part in the event in October and all the money raised would go to charities and good causes.

Next year’s event will be held on Sunday, October 7. The club says it needs almost 100 marshals on the course in addition to its regular volunteers and is appealing to local companies and organisations to help out.