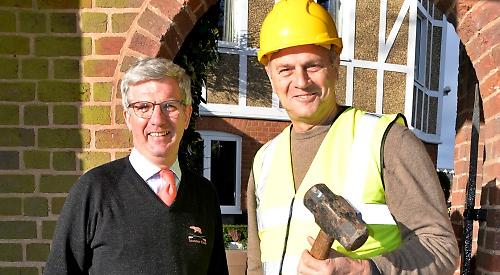 A NEW entrance gate is to be built at Leander Club in Henley for its 200th anniversary.

The new entrance will be about twice the width with a double gate bearing the club’s insignia and two metal plates inscribed with the years 1818 and 2018.

The old flat canopy, which was built before the Second World War, will be replaced with a pitched lead roof matching the entrance to the main building.

Sir Steve, who is a member of the rowing club and chairman of the Henley Royal Regatta, knocked out the first three bricks of the structure using a sledgehammer.

He said: “I’ve probably walked through this entrance more than most over the years and will be pleased to see something more fitting and practical as it’s very much needed.

“It will be good for the athletes not to damage their boats coming in and out.

“You can see marks all around the edge of the stonework where they’ve hit it, sometimes quite hard, though it does much more damage to the shells.”

He added: “I would love to knock the whole wall down myself. My father was a builder and I used to work with him in my early rowing days.

“Demolition was the most fun part of the job and years ago this would have been on my portfolio.”

The new entrance will take about six months to complete after which the club may seek permission from Wokingham Borough Council to replace a number of trees in the club’s grounds.

Leander general manager Paul Budd said: “The gateway has seen better days and we sometimes get people going into the car park before ringing us to ask where the entrance is.

“They overlook it because they can’t believe that’s the entrance.

“The work will be quite noisy for our staff but they’re used to the sound of weights being dropped in the gym.

“We’re rebuilding it in a slightly grander style. It will hopefully smarten up the front of the club and be something to last the next 100 years.”