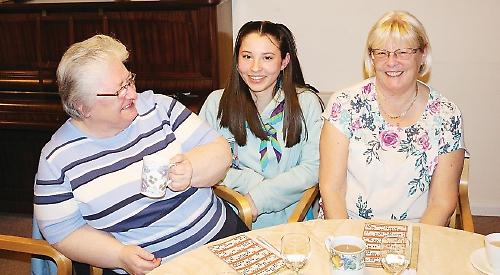 GIRL guides from Wargrave held a bingo night for residents of a retirement home in the village.

The Wargrave Rangers took turns calling numbers and helping the pensioners to fill in their cards at Elizabeth Court in Victoria Road on Friday evening.

The girls also spent time chatting to the residents, many of whom were guides themselves, about their memories.

Group leader Tamsin Phipps said: “The girls did all the calling, while some of them also joined in or helped the old folk with their numbers.

“We had a little prize such as a tin of peas or something similar.

“It was great fun and we spent a lot of time talking about yesteryear with the residents. I was amazed at how many of them could remember their old brownie promises.

“Community action is part of what our organisation does and the girls all had a great time learning about how life used to be.

“They enjoyed doing something different and giving back to the community.”

The Rangers, which are for 14- to 18-year-olds, were previously known as the senior section before being renamed last year as part of a move by Girlguiding UK.

The Wargrave section has more than 10. members.