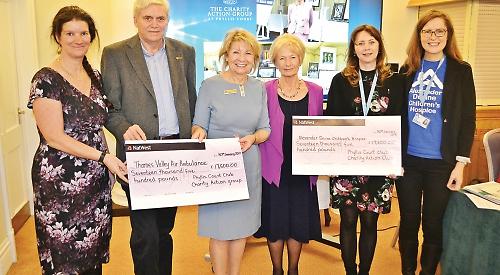 THE charity action group at Phyllis Court Club in Henley has raised a record amount for good causes.

Over the past year, members raised £35,954.66 through a series of events including clothing and jewellery sales, drinks receptions, talks, raffles and a quiz night.

A Christmas shopping event in December raised more than £10,000 and a raffle and auction of sports memorabilia during Henley Royal Regatta made almost £9,000.

At the group’s annual general meeting on Tuesday, cheques for £17,500 were presented to representatives of the Thames Valley Air Ambulance and the Alexander Devine Children’s Hospice in Maidenhead, which will open in the spring.

The group, which was set up 30 years ago to manage requests for donations from the private members’ club, has enjoyed record takings for six consecutive years.

Over the next year it will be raising money for Riverside Counselling Service for adults and young people in Henley, the Thames Valley Adventure Playground for disabled children and Carers Bucks, which is running a project for young carers at The Henley College.

Diana Pearman, who chairs the group, said: “As with many endeavours, success breeds success and as we have raised the profile of our efforts we have inspired more members to join us.

“Members of the club’s council were particularly involved and supportive in 2017 and we really do appreciate their contribution.

“Our team of women all contribute to every event and make these totals possible. This teamwork is crucially important. Our success is down to their enthusiasm and dedication so my special thanks go to them for all they do and the support they give me.”

Patricia Christmas, the club’s chairwoman, said: “Last year was difficult for anybody trying to raise money but because we enjoyed everything that these wonderful women laid on, we enjoyed spending our money on it.

“It’s easy to let your money go when you’re having a good time.”