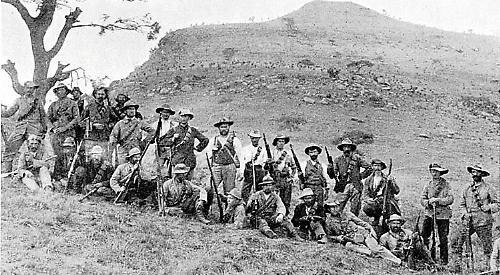 ON February 6, Michael Redley gave members a fascinating talk about the Boer War.

This war is often thought of now as a colonial war of minor significance compared with the two world wars.

The war came about through Britain’s refusal to accept the Boers’ terms for the independence of the Orange Free State and the Transvaal in South Africa.

Britain was determined to be the paramount power in the region.

Henley became involved in the conflict to a considerable extent with 20 regular soldiers and 11 volunteers from the town.

Leonard Noble, of Harpsden Court, encouraged the recruitment of volunteers in Henley and particularly the surrounding villages.

Britain was unprepared at the beginning of the war in 1899, leading to the Boers besieging the towns of Mafeking, Kimberley and Ladysmith. Britain’s fortunes improved following the Battle of Paardeberg in February 1900 and the besieged towns were relieved.

There were great celebrations in England, although these were somewhat muted in Henley, where the inhabitants were more concerned for the welfare of their fellow townspeople in South Africa.

The Boers changed their tactics to guerrilla warfare, prompting the British to respond with a “scorched earth” policy of destroying farms which could offer support to Boer soldiers.

This approach by the British had some military success, although they found it difficult to extinguish guerrilla activity completely.

Finally, however, a peace treaty was signed in May 1902, bringing the war to an end.

The war had a political impact on Henley.

Henley’s Conservative MP Robert Hermon-Hodge, whose party supported entry into the war, was defeated in 1906 by Philip Morrell of the Liberal party, which opposed the war.

This was the only time in history when Henley did not have a Conservative MP.