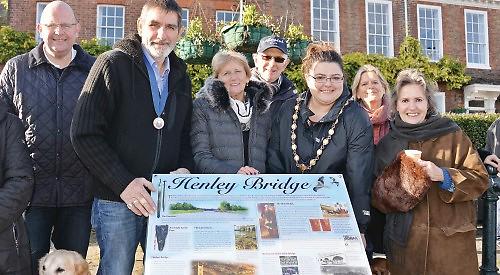 THE South Oxfordshire Archaeology Group’s dig on the Roman site at High Wood will restart on Friday, March 16.

There will then be a session every other week with each session lasting five days. The site is to the south-west of Harpsden, near the Bottle and Glass pub.

This year there will be two main trenches, one near the path through High Wood and the other near the mound that was excavated by our group between 1977 and 1984.

The first trench will seek to further explore a range of buildings that have been under investigation for the past two years. They appear to be workshops of some kind.

The second trench will explore a corner of the enclosure wall. Expectations for this year are high as there are known walls and building materials in both areas.

Anyone wishing to take part should email group secretary Mike Vincent at secretary@soagarch.org.uk or call Andrew Allum on (01491) 578993.

Another information panel (the fourth) about Henley’s past was unveiled at Singers Park in December.

This records the history of the river crossing here, which was researched by our member Viv Greenwood.

Other panels include one about the life of Henley’s brilliant minister, inventor and engineer, the Rev Humphrey Gainsborough, which is at the entrance to the Gainsborough estate, and another recording the many contributions made to Henley by the Makins family, sited at Makins recreation ground.

The other plaque tells the story of the unlikely survival of the Henley obelisk while the fifth, which is now in progress, will focus solely on the Siberechts painting of Henley as seen from Marsh Lock, the original of which is on permanent display at the River and Rowing Museum.

The brick wall in the rear yard of the Catherine Wheel in Hart Street belongs to the lodging range of the adjoining Old White Hart, which was built in 1530 and is Grade II* listed.

For some reasons a large section of this Tudor brick wall was painted on the pub side, perhaps in an unfortunate attempt to “brighten up” the view from the hotel windows and outdoor guest seating area.

At long last conservation officers at South Oxfordshire District Council have reached an agreement on the removal of the paint and making good the boundary wall.

Let’s hope the Tudor bricks will be treated with great care and the expertise they deserve.

On March 6, Graham Twemlow gave a delightful talk to members about the artists and designers of the 20th century who lived in and drew their inspiration from the Chilterns.

Artists have long painted scenes in the Chilterns, from Jan Siberechts’ 1698 view of Henley, to Turner, Edmund Niemann and Samuel Palmer in the 19th century.

But it was during the 20th century that artists were particularly drawn to the area.

After the First World War, in which they first served as army officers and later became war artists, they moved to Chalfont St Peter and Gerrards Cross respectively.

Later Paul’s work took a somewhat surrealist turn, which influenced the character of his work as a war artist in the Second World War.

Perhaps the most famous artist of the Chilterns was John Piper, who lived at Fawley Bottom with his wife Myfanwy.

His choice of subjects extended far beyond just the Chilterns and included atmospheric paintings of buildings throughout the country.

Piper also worked in applied and decorative arts, producing illustrations for books such as the Shell travel guides, stained glass (including that in Nettlebed church) and theatrical sets.

Other decorative and applied artists resided in the area, notably the sculptor and calligrapher Eric Gill, who lived at Speen in Buckinghamshire.

Gill was particularly well-known for his sculptures on Broadcasting House and the design of the Gill Sans typeface, originally used for the London Underground.

How lucky we are to live in such a beautiful and inspiring area!

Our lecture season continues from next month as follows:

Ms Ridley is an assistant curator at the River & Rowing Museum.

She studied archaeology and anthropology at Oxford University and went on to do an MA in museum and artefact studies at Durham University. She has a particular interest in craft production methods and in visitor perceptions of replicas in museums.

Her talk will cover the early part of Anne Damer’s life as a socialite and sculptor.

May 1 — James Mather on “The Watlington Hoard”.

Mr Mather, who is 62 and retired, has been metal detecting for 25 years. His numerous finds include the Watlington hoard, a collection of treasure including 200 rare coins or coin fragments, Viking arm rings and silver ingots.

Some of the coins date back to King Alfred the Great of Wessex (871-99) and King Ceolwulf II of Mercia (874-79). Archaeologists have said the find is “nationally significant”.

There will be an opportunity to handle some finds, including some replica hoard items.

June 5 — Jack Ogden on “Invincible no longer: diamonds in the medieval world”.

Mr Ogden is an archaeologist and historian who focuses on the development of jewellery and technology.

He is an acknowledged authority and has written and lectured widely on the subject for more than 40 years.

This talk will look at the early history of diamonds with a particular focus on the medieval European world where there was increasing trade in diamonds from India and the first steps in the development of diamond cutting.

Diamonds were seen as invincible and surrounded by myth but, gradually, rudimentary polishing developed and by the end of the medieval period there was true diamond cutting and the birth of the diamond industry.

Chairwoman Pam Syrett says: “I had hoped that a new chair would be appointed at the last annual meeting but as this didn’t happen I must point out that I am in my fourth year and we need to find somebody who will bring fresh energy and ideas and take over next year.

“It is a rewarding, honorable position, making new friends, learning and keeping active.”

All lectures are held at King’s Arms Barn on the first Tuesday of the month at 7.45pm. All welcome, members free, non-members £4.

This year’s outings are as follows:

May 17 — Coach trip to Kelmscott and Buscot (departure 9am) from Sacred Heart Church in Vicarage Road.

The visit will start at 10.30am with a guided walk with local historian Audrey Long looking at all aspects of this medieval village and its connection with the Bronze and Iron Ages of Blewburton Hill and the first Anglo-Saxon settlers in the fertile, water-rich vale below.

There will be time for a lunch break at the Red Lion before the opportunity of a walk up Blewburton Hill.