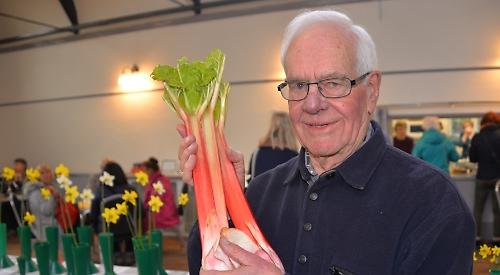 Scores of people visited the event at the village hall on Saturday, browsing the exhibits and enjoying tea and cakes.

Entries were slightly down because of the two cold snaps earlier this month but organisers say they were expecting far worse.

The attendance was the highest for several years.

The Davis Cup for most points in show went to  Jacqueline Wilkins, of Clevemead, Goring, who won four classes, including vases of hellebores and violas, and was placed second or third in several others.

She said: “I’m pleased because there are so many people like me who had so little in their gardens this year yet we still managed to have a show. It was very difficult to grow this year because of the big freeze and the fact that there was so little sunshine.”

Mrs Bradstock said: “We were worried that the season hadn’t properly developed and there wouldn’t be many entries but everyone pulled together and there’s a good variety.” Club founder and president Derek Leary, who came second in the vegetable classes with a 17in parsnip, said: “We’ve had a lot more visitors this year and I think that’s because people are so keen to see the spring after such a dark winter.

“The cold weather has knocked back a lot of the plants so we were very surprised to have so many entries. I certainly didn’t expect such good results in my own garden. I was digging up a lot of forked parsnips before I dug up this one.”

Jim Thomas, of Penny Piece,  won five classes, including rhubarb. He said: “Earlier in the week I was worried there wouldn’t be anything to show but it didn’t turn out too badly.”

Davis Cup for most points in show — Jacqueline Wilkins

Most points in show (children) —Alexandra Kenny and Rosie Megan

Pot or bowl of any flowering plant(s) — Patricia Bradstock

Any other vegetable — Christie Leary