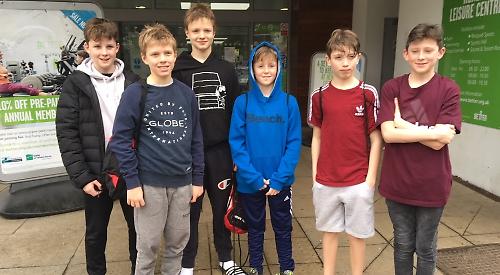 Among them were pupils from Trinity and Valley Road primary schools, Gillotts School, the independent St Mary’s School and Nettlebed Community School.

Teams ranged in size from three to seven swimmers.

The event was launched by the Lions’ community services chairman Ian Tritton and Henley Deputy Mayor Lorraine Hillier, who gave a short speech thanking the participants. Each team then swam in a relay style for 40 minutes while their lengths were counted on scoreboards by Lions.

Parents, siblings and friends watched from the spectator area and cheered on the swimmers.

Afterwards, Councillor Hillier presented each team with a commemorative glass trophy marking the centenary of the Lions internationally.

The most lengths were swum by the Dicey Dolphins, who achieved a personal best of 103 lengths and raised about £200.

Seb’s mother Alex Baker said: “They did 96 lengths last year and were determined to get to 100 so they were really cheering when they reached 103. They went to the Regal Picturehouse cinema afterwards to celebrate.”

All teams split their proceeds between the Lions, who will donate it to a children’s charity, and a cause of their choice apart from the brownies, who donated all of their £330 to the club. The brownies also achieved a personal best in the event of 84 lengths. Swimarathon organiser Liz Brent said: “We raised about £1,000 more than in previous years, thanks to a larger number of entries from Gillotts than usual.

“It’s always a fun afternoon because the kids get really excited and there’s such a happy atmosphere. It gets incredibly noisy as you hear them cheering each other on and the parents are always very supportive.

“We’re very grateful to the leisure centre and its new manager Paul Hackwood, who had only just taken up the post but pulled out all the stops to help, including doing some lifeguarding.”

Cllr Hillier said: “There was such a fabulous atmosphere. They did a really good job and the kids absolutely love it.

“They came up with such funny, catchy team names like the Shiplake Sharks.

“The Lions do such fantastic work in the community and I was pleased to be able to support them.”