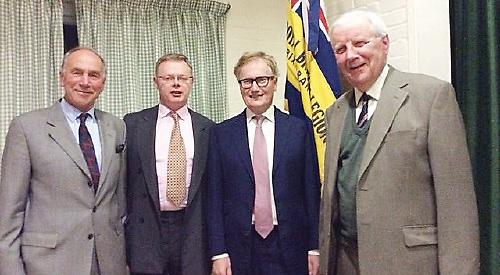 “LIFE with reserves and horses” was a fascinating evening talk given by Major General Simon Brooks-Ward to a packed Bix village hall, hosted by the branch.

The talk was about the Army Reserve and its role in modern defence by the man leading its transformation over the last three years and about his civilian occupation heading his company, which stages major equestrian events.

Gen Brooks-Ward commanded the Royal Yeomanry during the Iraq War in 2003 and won the only Reserve Unit Battle Honour awarded since the Second World War.

By coincidence, the day of the talk was the 15th anniversary of the advance into Iraq. In October 2015 he was appointed Deputy Commander Field Army as Major General with responsibility for the Reserves (formerly the Territorial Army) until January this year.

Major Richard Nall, a local resident, served in the regiment at that time as a troop commander and remains an active member of the Reserve.

The general outlined the increasingly important role the army reserves play in our national defence now that the regular army has been cut by 20,000 and the reserves increased by 10,000 to compensate in part.

He also drew attention to the planning and understanding necessary for the reservists, their families and their employers.