If you want to become a retained firefighter, it’s tough 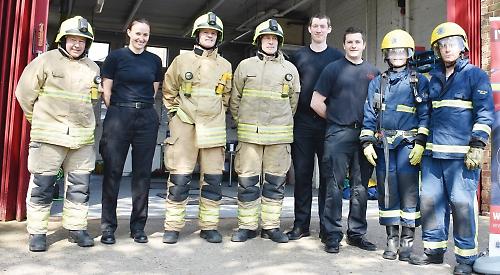 SEVEN people were given a taste of what they would have to go through in order to become retained firefighters.

A “have a go” day, hosted by Oxfordshire Fire and Rescue Service, was held at Watlington fire station.

The participants were able to try some of the practical tests that make up the physical assessment during the recruitment process.

These included a ladder climb to test their fear of heights, an equipment-carrying exercise to test cardiovascular stamina and strength, a “casualty drag” using a dummy and an equipment lift simulating lifting a ladder on to the back of a fire engine.

The participants also had to assemble equipment to test their manual dexterity and ability to follow instructions as well as wear full breathing equipment.

Nick Windsor, station support officer for Watlington and Henley fire stations, said: “It was a tough day for the people who came down but everyone seemed to enjoy themselves.

“The aim was to give them an idea of the tests they would need to undertake. The majority passed all the assessments.”

Watlington has nine firefighters but needs more in order to provide 100 per cent coverage. Mr said: “If we had 12 to 15 people I think that would help and we won’t stop recruiting because as people join others will leave.”

If you would like to become a firefighter, visit drill night at Watlington fire station in Gorwell on Wednesdays from 7pm to 9pm or see www2.oxfordshire.gov.uk/
cms/public-site/call-firefighters