Reports from latest meetings and activities of clubs and community groups 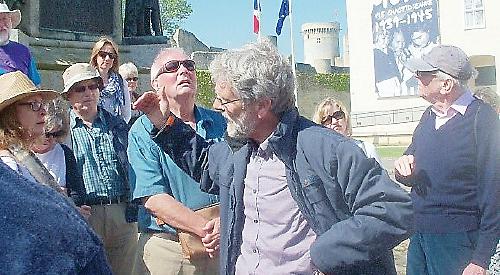 A PARTY of 30 members of the association, ranging in age from nine to 90, has just returned from an extended weekend visit to Henley’s twin town in Normandy, Falaise.

Travel was door-to-door by coach and the inimitable Brittany Ferries and the sun shone from dawn to dusk throughout.

As usual, people stayed with host families, often old friends, sometimes new, but always with an amusing blend of languages as each side exercised their varying skills!

Being Normandy, the programme included a number of extended and tasty meals and a reception in one of the town’s historic buildings.

The inevitable speeches were restrained and blessedly shorter than has very occasionally been the case in the past.

There was also time for some members to be guided on a walk round the town by a member of the local tourism office’s team — a man with splendid English, great projection and an impressive ability to reveal all the signs of the town’s long history as well as the philosophy guiding its post-war reconstruction.

We learned how the castle, once a support for fighting, became a powerful signal of Norman power later when negotiations became more usual in settling affairs between contesting powers.

At a more trivial level, we saw that the telephone box given to Falaise by Henley some 30 years ago stands well-maintained near their camping and caravan area where members of our association are welcome to stay without charge. Others wandered round the town independently and round the market which takes place on Saturdays, evidently as much for socialising as for shopping!

A tour was organised to Bagnole a l’Orne, a nearby spa town with a delightful flower garden and a lake with pedalos for the younger members of the group to tire themselves on.

Henley Choral Society was also in Falaise, combining with a local chorale, Interlude, to present a concert on the Saturday evening in one of the town’s imposing churches.

This was most successful and well attended by our members and the local community.

Tired but content probably summarises the prevailing mood when the group disembarked from the return coach in Henley at midnight.

Now the association looks forward to arranging next year’s visit by the French to us.