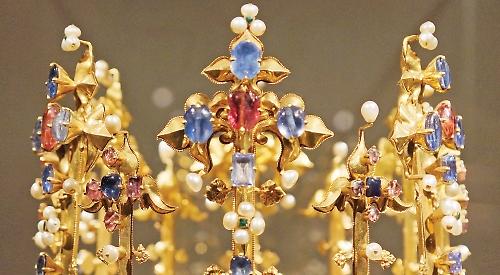 ON June 5, renowned gemmologist Dr Jack Ogden gave members the last talk of the summer on the history of diamonds, illustrated with some spectacular images.

The talk was called “Invincible no longer: diamonds in the mediaeval world”.

The earliest diamonds came from India and were first used around 500BC for “industrial” purposes — drilling, especially for producing intaglio gems.

Use in jewellery came later — a gold ring dating from about 300BC from Afghanistan contains a pink sapphire from Sri Lanka and Indian diamonds. The Romans used unworked, double-pyramid shaped diamonds in gold rings.

By the Middle Ages, in Europe diamonds came to be used in elaborate high-status objects, such the crown of Princess Blanche (late 14th century), and were given as gifts.

Fanciful stories arose about the origin of diamonds at this time. They were believed to have come from a pit guarded by serpents and were gathered in pieces of meat retrieved by birds!

It was during the mediaeval period that diamonds were first modified, initially by polishing using diamond dust, to enhance their appearance.

Advances in cutting technology allowed spectacular objects to be produced, such as the Great George jewel made in 1661 for Charles II.

The first style of cut was the table cut with a flat top to the stone, followed by the rose cut and the spectacular brilliant cut, the most popular today.

When diamonds could be cut, they were no longer “invincible”.