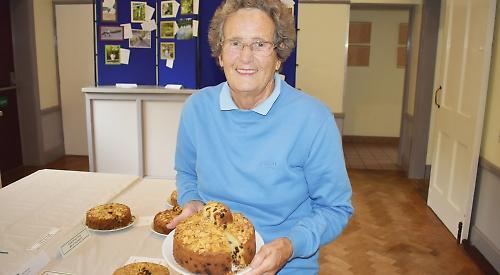 The 78-year-old, whose wife Jeanne is a founder member of the gardening club, took home five of the 17 trophies and certificates that were up for grabs as well as winning 11 of the event’s 63 classes.

He won the top vase cup and Royal Horticultural Society Banksian Medal for most points in the horticultural section as well as the cups for best hanging basket and most points both in the flower section and the show overall.

Mr Davis also won in eight floral classes including the single and mixed variety hanging baskets, two vegetable classes and once in the cookery section for his four shortbread squares.

He said he could not have won them without help from his wife, who decided to sit this year out after winning eight of the main awards and 13 classes at the previous summer show.

In 2012 the couple, who used to live in the village but have since moved to Preston Crowmarsh, took home more than half of all available prizes and last year they won more than a third. At least one of them has entered every show since it was launched more than 20 years ago.

Mr Davis said: “I was very pleased with the result as growing was quite a struggle this year due to the weather. It was very hot and I was having to water the garden every day but it’s not the same as having rain, which plants prefer.

“I think there was a pretty good standard of entries all round. In view of the weather, everyone had really put themselves out to produce some impressive specimens and it was very well attended considering that it’s a local members’ show.

“I must also thank Jeanne, who stepped back this year but helped a great deal and still deserves a lot of the credit.”

There were about 180 entries at this year’s show, which took place at Goring village hall on Saturday, and this was an increase on last year’s figure of 168. The number of entrants also increased from 17 to 20.

The winners included new club members Andrea Cooper, who was joint winner of the Flower Arranging Challenge Cup and also won the table centrepiece category while Brenda Pont came first in one of the fruit classes.

Jeremy Hutchins won two of the three photography classes with images of the RHS Rosemoor garden in Devon and a pelican in Charleston, USA. He won the overall trophy for the section.

The 71-year-old, of Pennypiece, Goring, said: “We always enter but this is the first time I’ve entered photographs. I enjoy coming to the show and it’s not the winning but the participating.”

The show’s chairman David Woodage, of Elvendon Road in Goring, won a certificate for best vegetables in show with his five potatoes and came top in eight classes overall. Another strong entrant was Christie Leary, who won the Fruit and Vegetables Challenge Cup and a further seven classes.

Members of the public could inspect the entries, purchase plants and enjoy refreshments organised by the club’s treasurer Val Calladine, who also won the cup for best patio container, certificate for best flowers and two floral classes.

Mr Woodage said: “It was very good considering that it was a dreadful year for gardening. It’s been a particularly poor year for flowers. You can use the hosepipe on them but they just don’t take it up as well as they do in the rain.

“However, we had more entries than expected and it’s always encouraging to see new faces taking part and winning. We had a constant stream of people coming in and the plant stall did well so it was very much a success.”

The full results are as follows:

Three dahlias other than cactus, semi cactus or pompon — David Woodage (2nd only)

One dahlia, any variety — Rodney Davis

Dish of any other fruit — Sally Alder

Three carrots of any one variety — Christine Knox (2nd only)

Any other vegetable — Christie Leary

Trug or other container of garden produce — Jim Thomas

Flower arrangement in a tea or egg cup — Christine Knox

One jar of pickled eggs — Christie Leary (2nd only)