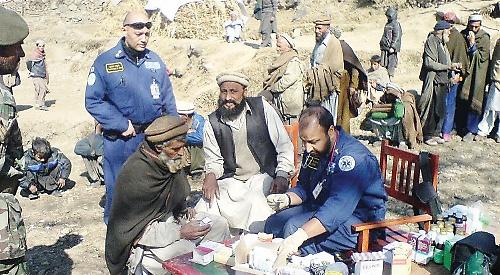 IT has assisted in some capacity with every world disaster since 2004, but many people in Henley don’t know that the town has a search and rescue emergency response team.

The group was formed in 2002 as Oxfordshire Search and Rescue by Gary Foo and now has up to 70 members who assist at natural disasters such as extreme weather, earthquakes and violent storms both at home and abroad.

This work includes “offline” support such as monitoring catastrophes so that a team of volunteers can quikly fly to a disaster zone if they are need.

Mr Foo, 52, started the group with his wife Virginia when they were both police officers and living in Shiplake. He is now a paramedic and she is a nurse.

“We saw a gap,” he said. “This was before search and rescue was a thing in this country but we saw there were people community with resources.

“When there’s a disaster you pull these resources together as you need people with skills. They come together, do a professional job and then go back to their normal lives when the emergency subsides.”

The team was originally based at Fawley Court but has spent the last four years at the Henley Business School’s Greenlands campus, near Hambleden.

It has assisted in dozens of disasters, as well as providing support for councils and authorities, including the police and the fire services.

Oxfordshire Search and Rescue is also officially recognised by the United Nations, meaning it is asked to provide aid during disasters.

The team has been active internationally since the tsunami in the Indian Ocean on Boxing Day in 2004.

Mr Foo said: “When there’s an emergency, the international team have all their gear packed and when they get the call they can be out there in 12 to 24 hours.

“All the big incidents in recent history we have supported, either offline or by going to. We were watching Hurricane Florence in America last month and last year they had Maria, which we supported offline.”

One of the orignal members was Paul Giles, a paramedic who works in London and lives in Reading. He and Mr Foo first met when they were both working for the police and says the emergency rescue team is different from other agencies as it combines a people with a wide range of different skills from backgrounds.

Mr Giles, 50, said: “We’ve had plumbers and builders. When we go to these areas where there are disasters, having people with the skills of knowing how to build and fix buildings is important. Even if it’s interpersonal skills, that helps.”

A more recent recruit is Richard Coates, a restaurant consultant who lives in Greys Road, Henley, with his wife Carol Decker, lead singer with band T’Pau. He is a family friend of Mr Foo.

Mr Coates, 54, has military experience, having served three years in the Parachute Regiment and joined the team two years ago.

Since then, he has trained as a swift water rescue technician, meaning he can assist in water rescues.

He said: “Gary was always trying to tempt me in. I always wanted to do something in the community and he wore me down eventually. There are a lot of ex-forces people involved.

“Most people train in-house. We can qualify them in national standards like Defra and medical first aid. I didn’t have medical expertise but I’m now a swift water rescue technician and I’m qualified on the marine unit.”

Among the biggest disasters the team has been involved were the earthquakes in Pakistan in 2005 Haiti in 2010.

Mr Foo recalled: “In Pakistan we were treating up to 700 casualties a day. It was on the border with Afghanistan in the mountains, 12,000ft up. We were dropped off by the special forces and there was no time to acclimatise to the altitude. We did 8,000 people in a few days.

“It was catastrophic. We were on the mountain that had the epicentre underneath. We did really well as a lot of those people had never seen Westerners before.

“There were several earthquakes and aftershocks while we were there, which affected us. You felt the ground rumbling, it was like a train coming.We lost kit and rescuers from other countries had to be pulled out of landslides.

“We were there for three weeks and a few months later we went back to some of the villages. We continued to treat them, brought orthopaedic surgeons and helped children who had lost their parents.

The Haiti quake was as bad, if not worse, and left thousands of people were displaced.

Mr Foo said: “It looked like a warzone. There were lots of amputations — many people had bad wounds and massive hemorrhages.

“There are pictures of people being carried out on doors and us treating them.

“We would wake up and there would be 7,000 people sleeping on the ground outside our tent waiting to be seen. Many had really bad wounds and nobody had seen them. We were the first team in the region.”

Mr Giles recaled: “One of the most interesting things in Haiti was trying to convince the locals that they didn’t have to pay for help. They were wondering who was going to foot the bill.”

Closer to home, the team has been involved in rescues in Henley when the town suffered flooding in 2013 and 2014.

Mr Foo said: “We were based at the fire station in West Street and were going on calls with the fire service. We worked around the clock.

“We can go to any flood in the UK, particularly in the Thames Valley, and evacuate people from their homes.

“We do rescue and medical assistance with anything from Storm Emma last year to snow, when the country comes to a standstill.

“We have an amphibious rescue team who do everything to do with water, ice and snow and have 4x4s so we can help people who are stuck. When the snow and ice came in March we saw people were struggling to get out of Shiplake so we had 4x4s on stand-by.

“We’ve helped police, the fire service and the county council getting nurses to people’s homes in rural areas.”

Such is Oxfordshire Search and Rescue’s success, it has spawned a sister group in Canada, based at Toronto Police College, and Mr Foo now splits his time between the two countries, staying with friends in Greys Road when he is in Henley.

He explained: “My wife is Canadian and we have a lot of contacts there. I served on the police there as well as in the Thames Valley.”

Mr Foos’s two children are also involved. His son Josh is a full-time firefighter and rescuer and his daughter  Jessica is a full time nurse. Both grew up in Henley and went to Valley Road Primary School and Gillots School.

The team has gathered support from local figures including Sir Martyn Arbib, who founded Invesco Perpetual, and his son-law Paddy Nicoll, former chairman of trustees at the River & Rowing Museum, as well as local business such as Hobbs of Henley.

Actor Jeremy Irons, who lives in Watlington, is its patron and joined the team when it provided support at this year’s Thames Traditional Boat Festival in Fawley Meadows.

Mr Foo, who is also an actor and stunt performer, has known the film star for about 10 years.

He said: “I knew he was interested in doing humanitarian work so I asked if he wanted to be our patron. He was very keen.

“It’s good to have him on board. He’s very positive and keen to advance it. He has done interviews and videos for us — there’s a lot of advocacy.”

Despite the team’s success, Mr Foo says it still flies under the radar in Henley. The team meets about twice a month to train.

Mr Foo said: “We have probably 60 to 70 members but about 10 to 20 deployable at a time, which is the size of a standard unit we go out with.

“We will accept anyone with a desire to help and transferrable skills. If they have had some training, great but we don’t need it. We have college students who want to join and we can train them up.”

Apart from disasters, the team regularly visits events such as the boat festival and Wargrave and Shiplake Regatta, where they can provide safety support for the people on the water.

This helps it to raise money for flights, equipment and maintenance. Mr Foo is also planning to start giving talks in schools.

He said: “Events are part of our fund-raising. We did the Christmas lights once and the Henley Food Festival a few years back. Even though we are based here, a lot of people don’t know they can use us or have us at events. They can pay us to bring medical, safety or water cover.

“We are specifically trying to get some equipment for things at the end of their life like the satellite phones we take out on missions.

“The money is also for regular servicing of boats and equipment and a new defibrillator.

“ We are all unpaid volunteers so any help we can get is appreciated.”

For more information about Oxfordshire Search and Rescue, visit www.ert-sar.com