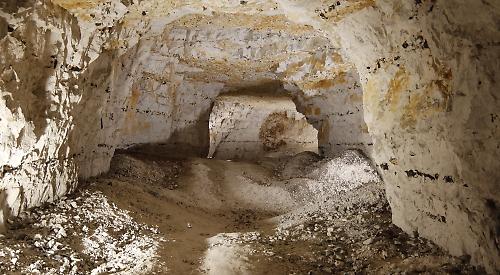 ON Sunday, March 24 Shiplake Lodge No 7942 organised a trip down the extensive chalk mine tunnels at Emmer Green.

The chalk and flintstone layers were laid down about 60 million years ago.

The chalk was mined to use in bricks, one of Reading’s three “Bs” (bricks, bulbs and beer).

It was added to clay to stop shrinkage when bricks were fired and also used in road building and agriculture. The first record of chalk being mined here is 1654 but it is believed that a local house built in 1590 used bricks from the Emmer Green brick kilns.

Graffiti is not new as there is some in these tunnels dated as early as 1722 among many examples.

Nine men were required to produce 1,000 bricks so this was a thriving workplace.

During the Second World War the tunnels were used to store Reading’s archives.

All that remains are deteriorating tea chests, a copy of the Manchester Guardian from 1942 and a tram and bus timetable.

During the war the caves were used by Churchill’s “secret army”.

The soldiers lived down there as part of a last line of defence, stretching from the Thames estuary through to Wales, in the event of a German invasion. They were tasked with blowing up the bridges crossing the Thames if necessary.

Chalk mining ceased in the Fifties due to competition from other major brick companies.

The 80ft shaft to the mine is within the 89th Reading Scouts’ centre and thanks go to the scout instructors who gave up their time to ensure we were all safely lowered down the shaft and, more importantly, got out again.

Nearly £750 was raised on the day which was split between the scouts, the 2022 Festival and Wokingham Mencap Society, the chosen charity of the master-elect of Shiplake Lodge.