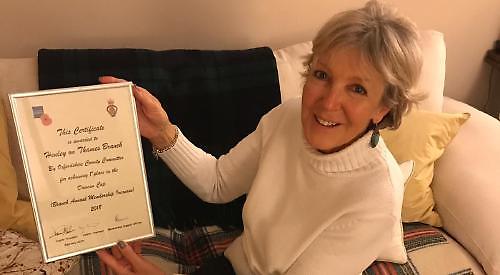 THE Henley and Peppard branch of the Royal British Legion has been presented with two awards.

It received the organisation’s Duncan Trophy for the most improved branch in Oxfordshire and a certificate in recognition of its growing membership.

In the past year 12 more people have joined, bringing the total number of members to 112 at a time when Legion numbers nationally have been falling.

The organising committee says the awards are down to its improved social offering with monthly meetings held at the Christ Church Centre in Reading Road, Henley.

Up to 50 members attend the gatherings, which are held every third Monday and include a guest speaker and lunch with a glass of wine followed by coffee.

The awards were presented by Lynda Atkins, who chairs the Legion’s Oxfordshire branch.

Membership secretary Mollie Jeffrey, who lives in Harpsden and joined in 2016, said she was “tickled pink” by the honour. She said: “When I moved to Henley I hoped to make more friends and I was invited by Stan Ainsley, a friend of mine and previous branch secretary, to join.

“It is a friendly group of interesting people. We’re all a team and have got some good people who are reaching out to others.

“I would like to be able to introduce some younger people.

“Because of the size of the community you get to know people and recognise them when you’re out and about.

“I would like to think that part of our success is to some degree down to the feeling that we are all in it together.

“There are other groups in Henley and there is always some overlap of members. One friend might introduce another saying, ‘You might enjoy this’, as Stan said to me.”

Mrs Jeffrey said she got the idea of having talks at meetings from similar events she attended at Phyllis Court Club in Henley.

She said: “I liked the idea of learning through talks and I thought the ones I’d been to were interesting and different. We’ve had Rebecca Stevens, who became the first British woman to climb Everest, and we’ve also had people talking about their time working on cruise ships.

“People enjoy coming to our social group and you don’t have to have military knowledge or background.”

Mrs Jeffrey thanked the Henley Standard for publicising the work and fund-raising efforts of the branch, saying it showed that members had fun.

She undertook a sponsored sky-dive in May which raised £3,500 and branch chairman John Green has taken part in a number of the annual Nijmegen Marches in the Netherlands.

Mr Green said: “Mollie’s hard work and enthusiasm has been instrumental in securing the increase in membership against the national trend. Before we moved to the Christ Church Centre we would welcome about 15 members to meetings but now they are really popular.”

Lieutenant Colonel Peter Blaker, who became branch president in December, said: “We are proud of the recognition given to us by these two awards but there is no room for complacency.

“We are fortunate to have a branch which is well led by a lively, competent and dedicated committee. We take seriously our duties to those former members of the armed forces and their dependents who need our help.”

Brigadier Malcolm Page, the branch’s patron and past president, said: “I am very gratified that we have progressed in this way and that we have been able to reach out.

“The membership trend is downwards nationally because there are fewer people in the forces and older members are dying off but we seem to have bucked this trend and that is largely down to the social aspects.

“We had tried evenings previously but they were not as popular as lunchtime events.”

Tickets to the lunches cost £10 and anyone can attend. For more information or to join the Legion, call Mrs Jeffrey on 07768 851615 or visit www.rbl-henley.org