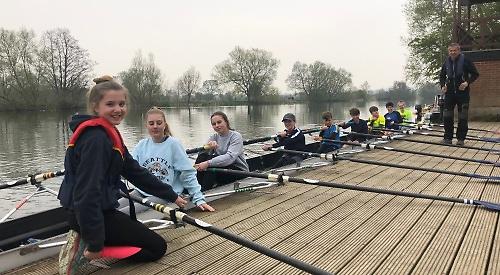 A NEW junior rowing club has been launched in Whitchurch.

The Thames Scullers meet four times a week from a landing stage on the Hardwick estate, off Hardwick Road, which was previously used by the Goring Gap Boat Club.

It caters for boys and girls between the ages of 11 and 18 and so far has 23 members with capacity for more, mostly at the more advanced level.

The club became affiliated with British Rowing in January and competed for the first time at the Abingdon Head of the River Race on April 14.

Most of its members signed up after taking part in one of the club’s “learn to row” courses, the last of which took place during the Easter holidays. They train in single, double and quad scull boats as well as an eight that has been adapted for sculling because rowing, which only uses one side of the body, is not recommended for younger athletes.

The vessels are on loan from the club’s captain, head coach and founder Ric Colborne, who runs a business selling second-hand boats, but it plans to apply for grants to buy its own.

Mr Colborne, a professional rowing coach who lives near Wantage, and Ms Woods, an architect who lives and works in Watlington, used to coach at Wallingford Rowing Club but left last summer to set up their own club.

They began sharing the Hardwick site in October and took over the lease at the start of the year, when the Goring club moved to a new purpose-built clubhouse near Lower Basildon.

They work with a team of coaches including former colleagues from Wallingford and have also arranged private access to Queenford Lake in Berinsfield. There are also plans to hire land training facilities for the winter.

The pair want the club to be accessible so charge only £240 per year and have set up a fund to subsidise youngsters who cannot afford this.

Ms Woods grew up near Marlow and learned to row when she was studying architecture at Cardiff University. She lost interest in the sport in the Nineties but got back into coaching when her eldest son Toby Francis, 16, took it up in 2013.

He still rows at Wallingford while Rory and his younger sister Cerys Francis, 12, are now with Thames Scullers.

Ms Woods said: “We spent several months looking for a site. You wouldn’t believe how hard it is to find a riverside location that’s suitable and we had a lot of disappointments along the way. At times it seemed unachievable.

“After our next learn to row course in May we’re expecting to be at capacity for novices until the existing ones move up to the higher levels. It’s amazing how many have stayed after doing the course.

“It’s proven more popular than we expected and it’s very important that we remain open to children from all walks of life. Anyone who wants to row should be able to do so, not just those who can afford it.”

She said the result at Abingdon was a very promising start. She said: “It obviously would have been even nicer to come first but surviving 2km in a single scull is quite a feat anyway and we’re thrilled with how they did.

“Everyone who’s involved has got so much out of rowing over the years and it’s a lovely experience to be giving something back.”

She added: “We’re all very grateful to Ric. He is the inspiration behind this and it’s thanks to him putting up the money that this has become a reality.”

The next learn to row course is between midday and 4pm from May 28 to 31 and costs £150. For more information, visit https://thamesscullers.webs.com