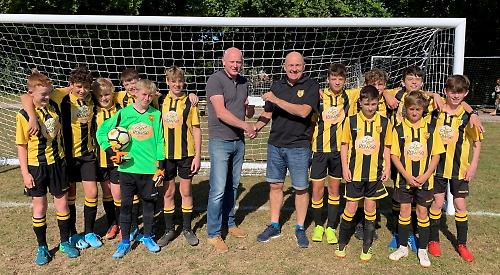 A FOOTBALL club in Gallowstree Common has bought two new goals following vandalism at its ground.

The damage occurred in April when the culprits drove a car around one of the two main pitches and a nine-a-side pitch at Rotherfield United in Horsepond Road.

They shunted a pair of moveable goalposts around the fields, snapping the crossbars and buckling the wheels, then drove into nearby woodland and set the Nissan car on fire before fleeing.

The new goals were funded by donations from individuals and businesses as well as the club’s GoFundMe page. Club chairman Andy Tidswell thanked everyone who donated, including Rob Blues, landlord of the Butcher’s Arms pub in Blounts Court Road.

Mr Blues raised £2,000 for the club at the Big Bash music festival, which was held at the pub in June.

Reading FC also organised a club day for 160 parents and children associated with Rotherfield United at its final Championship game last season. The club donated £500 to help cover the cost of new equipment.

Mr Tidswell said he was grateful for the money from other clubs, businesses and individuals.