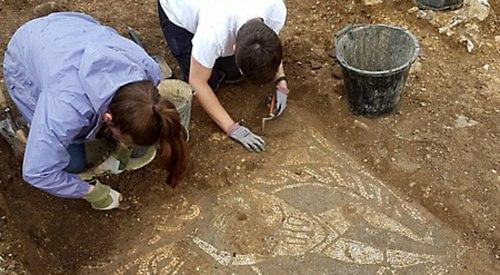 Tea and coffee in the Grade I listed tithe barn, built in ashlar limestone with a limestone slate roof, gave us a chance to enjoy its magnificent interior with original roof timbers. A dedication stone carries a date of 1570.

The house, which is not open to the public, had a brew house, coach house and stables when it was built in the 16th century.

It was rebuilt in 1598 in the Jacobean style and again at the beginning of the 18th century, this time in the Georgian style but retaining some of its earlier features.

Our focus was the award-winning three-acre garden that surrounds the house.

Years of dedicated work by an expert team have produced a design that includes topiary, a knot garden, walks, terraces, an 18th century walkway with vistas of the landscape beyond, spring-fed water features, a shade house, a white garden and wide herbaceous borders with many rare and exotic plants.

These provide swathes of colour in the late summer and autumn before being protected during the winter months.

After a brief lunch stop at Batsford Arboretum, we visited Sezincote, a country house built in the Indian Mogul style but in local stone, nestling in the Cotswold countryside.

The estate was bought in 1795 by John Cockerell, who had made his wealth as a colonel in the army of the East India Company.

In 1798, it passed to his youngest brother, Charles, and the commission to build the house was given to another brother, the architect Samuel Pepys Cockerell.

The artist Thomas Daniell provided the inspiration, drawing on 10 years of experience travelling in India, making numerous aquatints, watercolours and oil paintings of the architecture and landscapes using a camera obscura.

Charles Cockerell’s nostalgia for his time in India was reflected in the octagonal design of his bedroom, decorated to resemble a tent with wooden spears supporting a canopy.

The interior of the house is neo-classical in style. Here, we saw some of Daniell’s works, including a painting of the Prince Regent’s visit in 1807, which impressed him to such an extent that he changed his plans for the Royal Pavilion in Brighton, designed by Thomas Nash.

On November 5, the group enjoyed a talk on “Romans in Boxford” given by Duncan Coe and Matt Nichol, of Cotswold Archaeology, assisted by Lindsey Bedford, of the Berkshire Archaeology Research Group.

Geophysical surveys and excavations have been performed at three Roman sites in the village of Boxford in West Berkshire.

The first of these sites, Hoar Hill, contained a Roman villa comprising two separate wings (joined later), which was abandoned in the 4th century. The second site, Wyfield Manor Farm, was a farmstead which, unusually, contained a corn drier, possibly suggesting brewing activity.

It was the third site, with the unglamorous name of Mud Hole, which was the most exciting.

It contained a villa with an unusually large (6m x 5m) and fine mosaic in one of the main rooms, which has attracted a good deal of international interest.

It is thought that the mosaic was laid in about 380AD, close to the end of the Roman occupation, so the owners may not have had long to enjoy it.

It was on view to the public this summer but has since been carefully covered over as it would be too expensive to lift and store.

The mosaic featured scenes from classical mythology, including Bellerophon riding on Pegasus and slaying the three-headed monster, the Chimera.

Another scene shows the story of Pelops and his intended bride Hippodamia, the daughter of King Oenomaus, who was treacherously killed in a chariot race designed to decide on the marriage. As in many of such myths, the story did not end well.

The next gathering will be the annual meeting on Tuesday, December 3. After the business, there will be an interval for refreshments followed by several short but no doubt interesting presentations from members on the subjects of their research.

The first meeting of 2020 will be on January 7 when Catherine Edwards will talk about the archaeological excavations at Market Place Mews in Henley, which is being redeveloped.

The archaeological works started in October 2018 and the extensive dig has uncovered many items, including the remains of a 13th century well and Spanish and German pottery from the 16th or 17th century. Closer to the buildings in Market Place, the presence of an 18th or early 19th century apothecary was uncovered with items such as pestles, medicine jars, glass phials and toothbrushes being found. This shows the strong influence of London on the people living in Henley.

Catherine is a project manager at AOC Archaeology in London. She has directed field projects such as the Fremlin Walk development in Maidstone, two Roman cemeteries in Southwark and an archaeological investigation of the harbour in Jamestown, St Helena.

The lectures are then as follows:

April 7 — Edward Peveler (Beacons of the past and LiDAR: shining new light on the Iron Age landscapes of the Chilterns)

May 5 — Jill Eyers (Chilterns at work)

All lectures are held at King’s Arms Barn (entry from King’s Road car park), starting at 7.45pm. All are welcome (non-members £4).